Ascending to the Stars on a Beam of Light

Yee-haw! Whipping a rocket in the behind with laser blasts might be a more efficient way to get it to space than the regular tons-of-fuel model. 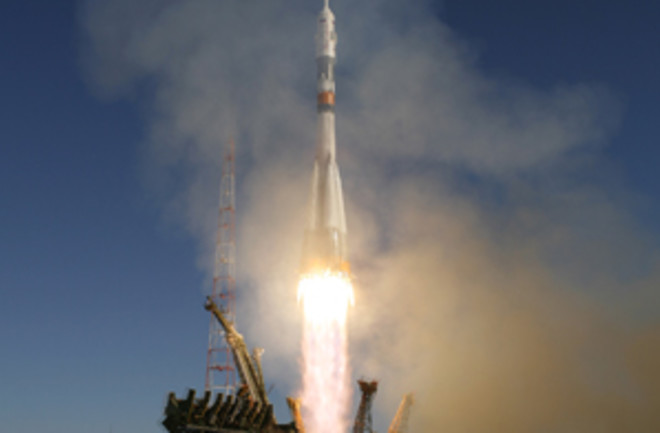 Look at a typical rocket and you’ll see a whole lot of fuel with a little payload tacked on top. That inefficiency is a big part of why it costs about $10,000 per pound to get a satellite into orbit. It is also why a group of researchers are investigating a radical alternative that could loft objects into space far more cheaply—using lasers instead of chemicals.

Recently declassified work by aerospace engineer Franklin Mead Jr. of the Air Force Research Laboratory and physicist Eric Davis of the Institute for Advanced Studies at Austin, Texas, describes this “lightcraft propulsion.” Their technique aims a high-powered laser beam upward at a small, low-mass craft. During takeoff, the laser causes air at the base of the craft to explode into a jet of hot plasma, generating thrust. Beyond the reach of Earth’s atmosphere, the laser continues to point at the craft’s underside, heating a propellant material (such as plastic-based Delrin) that lines its bottom. Mead has experimented with small-scale models to prove the feasibility of light propulsion, and Davis has investigated how to get the most out of the laser’s energy. The two researchers claim that their design could get satellites into low Earth orbit for around $1,400 per pound. “Not carrying the whole energy source on board reduces the cost to a fraction of what we’re used to paying,” Davis says.

Although no lightcraft has yet made it into space, one prototype—designed by Leik Myrabo, an engineering physicist at Rensselaer Polytechnic Institute—successfully flew 233 feet into the air under laser power. Myrabo says he could increase that height thirtyfold or more just by upgrading to a wider and more powerful laser beam. But reaching orbit will require megawatt lasers; so far, the best commercial lasers used in experiments have less than one-tenth that power. Military lasers could probably cut it, but they are difficult to access for civilian research. Myrabo is now collaborating with the Brazilian Air Force on efforts to boost laser power in tests at the Institute for Advanced Studies in São José dos Campos, Brazil