As the Piano-Sized New Horizons Spacecraft Approaches, Pluto and Charon Are Coming Into Intriguing Focus 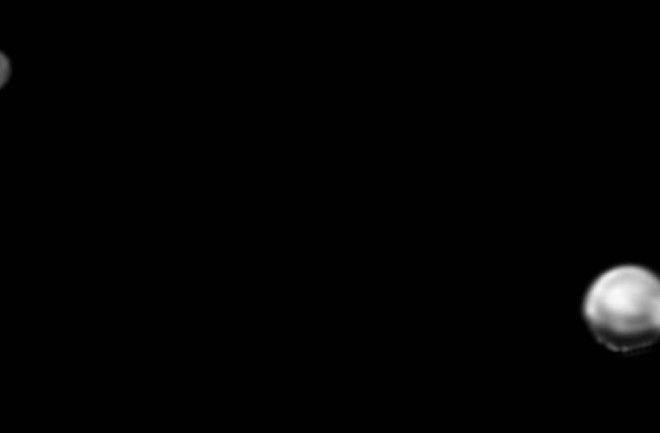 Pluto (right) and Charon (left) as seen by the New Horizons spacecraft on June 19, 2015. (Source: NASA/Johns Hopkins University Applied Physics Laboratory/Southwest Research Institute) The New Horizons spacecraft is about 13 million miles from Pluto and its largest moon, Charon. If that seems really far, consider the image above. It was captured by the Long Range Reconnaissance Imager instrument, or LORI, when the piano-sized spacecraft was even farther away — 20 million miles, give or take. Yet LORI could begin to pick out some intriguing surface detail on both bodies. Note the light and dark features on Pluto, to the right, which are indicative of large-scale aspects of the planet's terrain. (Although Pluto seems to have an irregular shape, that's an illusion created by the pattern of dark and bright regions.) And check out that dark region on Charon's north pole. It has been called an "anti-polar cap" — and for now, it is quite mysterious. Alan Stern, the mission's principal investigator, from the Southwest Research Institute, reacted this way:

About Charon—wow—I don’t think anyone expected Charon to reveal a mystery like dark terrains at its pole . . . Who ordered that?"

Now, New Horizons is just 17 days out from its closest encounter with Pluto. If all goes well (and a lot could go wrong!), on July 14 the spacecraft will swoop to within about 7,750 miles of Pluto (17,900 miles of Charon). For about a half hour, it will take close-up pictures in both visible and near-infrared wavelengths — images that should be able to resolve surface features as small as 200 feet across. So if there's a football stadium on Pluto, New Horizons should spot it! New Horizons is also beginning to beam us images that are being made into the first color movies of Pluto and Charon. Here's one:

A near-true color movie of Pluto and Charon made from images acquired by an instrument on New Horizons known as "Ralph" (a reference to the television show the Honeymooners). The images were taken on nine occasions between May 29 and June 3, 2015. (Source: NASA/Johns Hopkins University Applied Physics Laboratory/Southwest Research Institute) This movie is Pluto-centric," meaning Charon is shown as it moves in relation to it. Charon makes one orbit around Pluto every six days, nine hours and 17.6 minutes — which is the same amount of time it takes Pluto to make one complete turn on its axis. As Pluto spins, note the shifts in the brightness of those pixels. This is indicative of the brighter and darker terrains on the planet's different faces. It will be so cool to see what Pluto's topography looks like close up — and in color! Assuming, of course, that all continues to go well with New Horizons and it arrives at Pluto as planned. This would be no small feat, as Alexandra Witze pointed out in an excellent article published in the journal Nature yesterday. The headline pretty much sums up the challenge: "Pluto-bound probe faces its toughest task — finding Pluto." As Witze puts it:

"Because astronomers discovered the dwarf planet in 1930, they have seen only part of its 248-year path around the Sun, and they don’t know exactly where Pluto is. And New Horizons is so far from Earth that it takes 9 hours to send and receive a signal, making the spacecraft hard to direct in real time.

The New Horizons team will get only one shot at finding Pluto. So far so good. And keep your fingers crossed!