As the Hunt Drags Out, Physicists Start Searching for the Lightest Dark Matter

Maybe they haven't found dark matter because it looks different than they predicted? 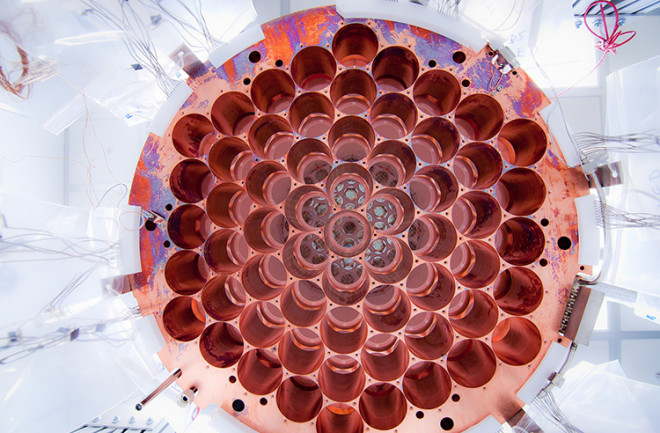 The Large Underground Xenon experiment in South Dakota is one of many projects searching for dark matter and coming up empty. (Credit: LUX Collaboration)

Dark matter, the invisible material that so far shows itself only through the pull of its gravity, was first proposed nearly a century ago. It took another half-century to truly ignite the physics community. But at this point, a plethora of highly advanced projects have gone hunting for dark matter and come up empty.

Now scientists around the world are turning to new methods, and searching for dark matter that may look different than theory originally predicted. In the past, those hunts have focused largely on what physicists think are the most likely kind of dark matter particles, known as weakly interacting massive particles, or WIMPs. These tiny particles only interact with our universe through gravity, and they’re the easiest form of dark matter to reconcile with physics as we know it.

But it’s possible, in the absence of such particles so far, that physicists’ guesses about these WIMPs aren’t quite correct. So now they’re expanding their guesses, and trying to stay nimble in their search.

Experts in the field of dark matter recently collaborated to form a new report put out by the Department of Energy, called “Basic Research Needs for Dark Matter Small Projects New Initiatives.” Their work suggests scientists should cast many smaller nets for dark matter, both in terms of trying many different things, and in searching for even tinier particles. The DOE has also offered $24 million in small grants over the next four years to develop new ideas in the dark matter hunt.

The report defines three avenues of research, as a way of guiding future work. One path emphasizes creating (and detecting) dark matter using particle accelerators that scientists are already using. The second path is to use sensitive detectors to detect “wild” dark matter particles — ones streaming from the universe around us. The third option is to look for axions, a hypothetical particle that some scientists think could fulfill the role of dark matter.

None of these ideas are in themselves new. But an interesting shift is playing out in the community, where some physicists are starting to look for lightweight alternatives to the more traditional dark matter particles. This idea, too, isn’t precisely new, but it has tended to keep to the sidelines of dark matter research, while the mainstream pursued the more hefty particle options.

Subatomic particles are often classified by their energy, rather than a standard mass in pounds or kilograms. The simplest version of a dark matter particle would have an energy somewhere between 10 and 1,000 GeV (or giga-electron volts). But this range has been tested extensively ⁠— though perhaps not exhaustively, yet.

So, to widen their search, scientists are looking at lighter particles with less energy than a proton, an elementary particle found in the nucleus of every atom. That shift means re-making many of their experiments. And to keep from getting bogged down in any one realm of exploration, scientists are exploring many different paths.

Physicists at the University of California, Berkeley, for instance, are testing liquid helium and gallium arsenide as detectors of lighter forms of dark matter. If their initial experiments go well, they could scale up these tests and use them in more established dark matter labs, which are often hidden deep underground to protect them from louder foreground radiation.

Rather than focus on pushing technology forward, the report encourages scientists to expand their horizons within what’s already possible. Perhaps the trick isn’t building a more sensitive detector, but simply looking for something new.