As NASA Prepares for the Next Asteroid Impact, Earth Retains Scars of Past Blasts 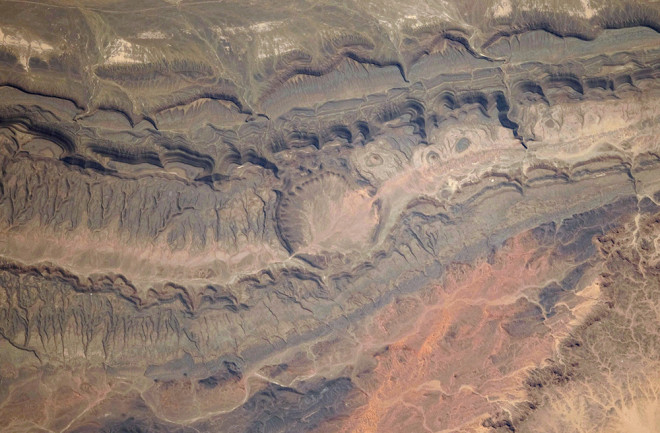 Ouarkziz Crater in Algeria (~70 million years ago), seen by the ISS crew in April, 2012. NASA. The Earth has always been in the path of rocks from space. When the solar system was forming, the early Earth was pelted with rocks so frequently that it left the surface molten. In fact, the creation of the Moon was caused by a massive impact of a "rock", albeit a Mars-sized rock. These days, there are many fewer impacts (thankfully) but the threat still remains that an asteroid we might not even know about yet could strike the planet. This week, as part of the 2019 Planetary Defense Conference, NASA is running a scenario where an asteroid impacts the Earth to contemplate what the results of such an impact might be today. The Earth has many battle scars from previous impacts. These relicts of asteroids are a reminder that Earth gets hit. Many times, the craters left by an impact is erased by the Earth's dynamic surface processes: weathering and erosion, eruptions, plate tectonics, oceans. However, some impacts are preserved due in part of their recency, size or the geologic history of the area. Let's start small. Barringer Crater (also more colloquially known as Meteor Crater) in Arizona was created by the impact of an object only 50 meters across known as the Canyon Diablo meteorite. It slammed into what is now Arizona around 50,000 years ago and produced a crater over 1 kilometer across. Thanks to the dry environment of northern Arizona (and recent impact age), the crater has been preserved with remarkable detail. This impact of a 50-meter asteroid likely threw debris for hundreds of kilometers in all directions, but was probably too small to cause any global (or even regional) changes.

Sentinel-2 image of Meteor Crater in Arizona, taken March 18, 2019. ESA. If we want to talk about the largest crater still visible on Earth's surface, we need to travel to South Africa. The Vredefort crater formed a staggering 2 billion years ago, but thanks to its location on the South African (Kaapvaal) craton -- some of the oldest rock on Earth -- the structure of the crater remains. It's size is almost as staggering as the age. The crater may have been 300 kilometers across but today all that remains is the deformed granite. The impactor is actually thought to be pretty small, only 10-15 kilometers across, but likely hit hard at over 20 kilometers/second.

The dark rims of the Vredefort Dome -- remnants of the impact crater -- can be seen in the middle of this Sentinel-2 image taken March 31, 2019. ESA. Here are a pair (well, trio) of impact craters from Canada. The first is Lake Manicouagan, a remnant of an impact from 214 million years ago. Today, all that remains is a circular, ring-shaped lake that represents the rim of the crater. The original crater was likely 100 kilometers across. One wild idea out there is that Lake Manicouagan is one of a string of impacts that circle half the globe that may represent a multiple-impact event caused by the breaking up of a larger object as it hit.

A snow and ice-covered image of Lake Manicouagan in Canada, seen by Sentinel-2 on April 8, 2019. ESA. Speaking of a multiple-impact event, the Clearwater Lakes, also in Canada, sure look like one. However, these side-by-side impact craters, both now filled with lakes, may be very different in age. The eastern crater has been dated at ~460 million years old while the western crater is ~290 million years old. This suggests that these two impacts, separated by almost 200 million years, just happen to occur in nearly the same location! The western impact shows the peak ring within the eroded crater. The eastern crater is now ~10 kilometers across while the western is over 20 kilometers across.

Clearwater Lakes in Canada, spotted by Sentinel-2 on September 19, 2018. ESA. Finally, we get to this one:

The Yucatan Peninsula in Mexico, seen by Suomi in April, 2019. NASA. So, where's the crater? Well, this one is cheating as you can't see it. Buried understand the northern Yucatan Peninsula and Gulf of Mexico is the Chixulub Crater, which is thought to the impact that finished off the dinosaurs. This impact occurred just under 66 million years ago by an impactor that may have been up to 80 kilometers across! The final crater was likely 150 kilometers across and 20 kilometers deep, which means an immense amount of material was thrown into the atmosphere after the impact. This would have plunged the planet into an impact-winter for years or longer ... and it is this disruption that could have spelled the end of the dinosaurs. NASA is hoping to spur more attention to the potential threat of an impact. Much like a massive volcanic eruption (think Toba or Yellowstone), an asteroid impact could be disaster larger than anything we have experienced in millennia.The Earth should be thankful for Jupiter as the giant planet deflects or destroys a lot of large objects that might head into the inner solar system. However, we should be proactive as well in searching for potential Earth-crossing asteroids of all sizes so we can prepare for the next impact. Maybe by then, we could prevent the impact or, at the very least, be prepared for the fallout from such a blast.