Once again, the Lunar Reconnaissance Orbiter has captured pictures of humanity's presence on the Moon! This time, it's the Apollo 16 landing site: 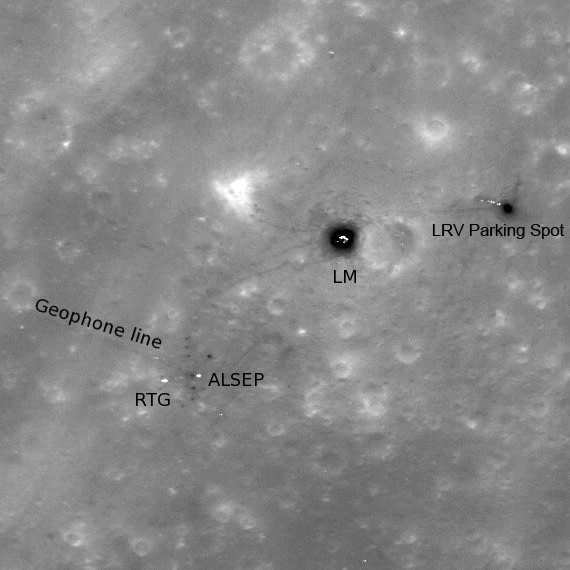 What an awesome picture! It was taken at local noon, so the Sun is shining almost straight down on the surface. That means there are no shadows, which de-emphasizes topology of the surface (changes in height like craters, hills, and dips) but provides brilliant contrast in brightness features. For example, the metal and white man-made lander and rover are so bright they are saturated in the picture. However, wherever the astronauts walked they stirred up the lunar dust, creating dark spots. The more often they walked in one spot, the darker that area. So the region around the lander itself (LM) and the rover (LRV) are almost black from bootprints. You can also see lines of bootprints radiating away from the lander and other spots. Amazing! Also marked are the locations of the Apollo Lunar Surface Experiments Package (ALSEP) and the radioisotope thermoelectric generator (RTG) used to power it. These were a series of scientific experiments designed to learn more about the surface, interior, and environment of the Moon. The geophone line was a seismograph used to measure moonquakes generated by the astronauts themselves using -- seriously -- mortar shells. You might think astronauts would be nervous carrying small bombs to the Moon, but given they rode at the top of a Saturn V rocket which carried about 3 million kilograms (6 million pounds) of fuel, I can't think a mortar or two bugged them very much. Someday we'll head back to this spot. When we do, we'll learn about how our artifacts have aged, and hopefully with a few decades of advances -- as well as trained scientists to poke around in situ -- we'll learn even more about our nearest neighbor in space.

Related posts: - One Giant Leap seen again - LRO spots Apollo 12 footsteps - ... and the flag was still there - One of the newest craters on the Moon