Ant Intelligence Could Help Us Steer Clear of Traffic Jams 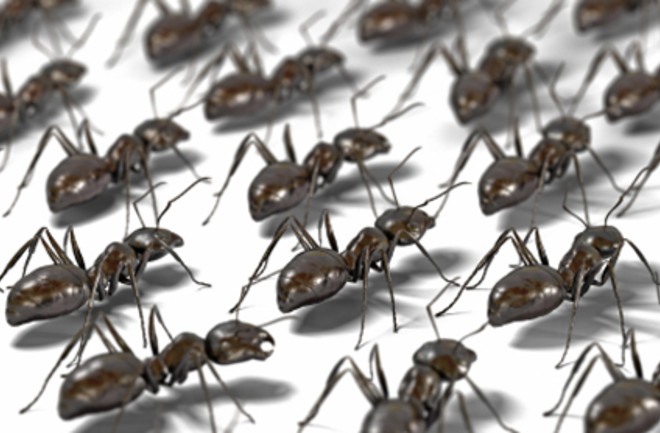 Earlier this month we wrote about a study of adaptable ants that changed their leaf-gathering strategies to bypass a roadblock thrown in their way. These clever insects solve traffic jams much more easily than big-brained humans do, and now scientists want to borrow their secrets to ease our highway woes. Ants leave a trail of pheromones to show others the best way back to the nest; when others follow, they leave their own pheromones and the trail is reinforced. They all work together through what biologists call "distributed intelligence." You can see this skill demonstrated in a Slate video here. Unfortunately, getting a swarm of humans to all work together isn't so easy. But thankfully, we might not have to—our cars could do it for us. Some scientists think we could copy ant ingenuity by teaching our cars to talk to one another. In one model, called Inter-Vehicle Communication, cars would send out a signal when they drop below 10 mph that tells other cars that they're entering a traffic jam. If all the vehicles in one area send this message, other drivers—whose cars are receiving this data—know to find an alternate route. Commuters aren't the only people who can learn from ants—according to Slate, companies that move merchandise by truck have turned to algorithms based on ants to figure out the most efficient routes through a congested area. Now if only we could lift 20 times our body weight like some ants can. Image: iStockphoto