Another in a String of Flares Explodes From the Sun, Sending a Cloud of Solar Material Racing Toward Earth 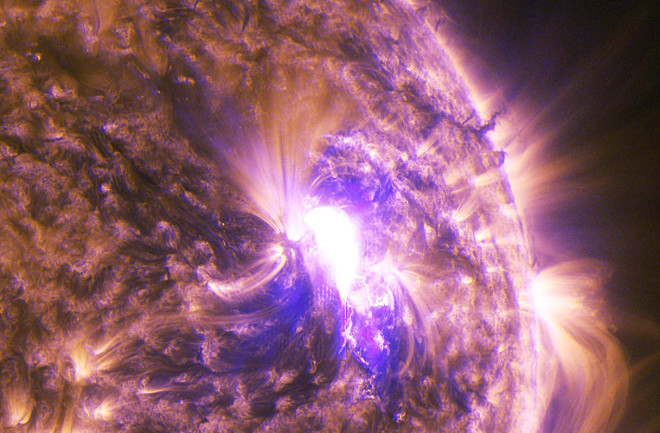 A mid-level solar flare exploded from the Sun today (June 25, 2015) at 4:16 a.m. This image of the solar flare was acquired by NASA's SDO spacecraft. (Source: NASA) The Sun sure has been acting up lately. Early this morning it let loose with yet another in a veritable string of flares — gargantuan explosions of radiation and solar material — many of them pointed toward Earth. Solar material blasted into space by today's flare is expected to reach Earth at about 1 p.m. EDT this coming Saturday, according to the Space Weather Prediction Center. But it's not predicted to trigger anything like the spectacular displays of the auroral borealis that occurred this past Monday (June 22) and into Tuesday. More about those displays in a minute, but first, check out the image above of today's flare, captured by NASA's Solar Dynamics Observatory spacecraft. Also, have a look at this pair of images of the solar material — called a coronal mass ejection, or CME — thrown off by the flare:

The SOHO spacecraft captured these two images of solar material — a coronal mass ejection — exploding outward from the Sun's atmosphere on Thursday, June 25, 2015. (Source: Space Weather Prediction Center) The LASCO instrument on the SOHO spacecraft used an "occulting disk" to completely block the extremely bright face of the Sun, allowing the instrument to image the fainter atmosphere (the "corona"). The result is these two images, taken 45 minutes apart, showing a massive amount of solar material being thrown outward into space from the corona. In that short amount of time, this coronal mass ejection traveled about 2.5 million miles! Another mid-level solar flare erupted this past Monday. That one triggered a filament of solar material many times larger than Earth to lift off and race toward us. When it hit, it triggered a very powerful geomagnetic storm, resulting in spectacular displays of the Northern Lights that were visible as far south as Colorado:

Here's what the aurora borealis looked like from space early on the morning of June 23:

The VIIRS instrument aboard the Suomi-NPP satellite captured this image of the aurora borealis on Tuesday, June 23, 2015. This dramatic rise in the Sun's activity began last weekend with a massive prominence eruption

— a dense cloud of solar material that exploded out into space when the magnetic energy confining it suddenly let go. Yet another prominence eruption occurred not long thereafter, launching a proton radiation storm toward Earth. Meanwhile, an active region (designated "2371") began firing off a series of flares, including the one on Monday that triggered the spectacular auroral activity earlier. https://youtu.be/mVnuEdqp4is Check out the video above acquired by the SDO spacecraft. The active region responsible for much of this week's action is visible at the start of the video toward the middle of the Sun's disk. Watch as it fires off flares, and also look closely at the Sun's surface. You should see evidence of the disturbance that launched the giant coronal mass ejection toward Earth. (Although the actual CME itself is not really visible.) https://twitter.com/metoffice/status/613695126754459648 Lastly, I thought I'd end with this Vine animation showing Monday's big solar KAPOW!