Another Big Earthquake Hits Mexico, This Time Near Mexico City 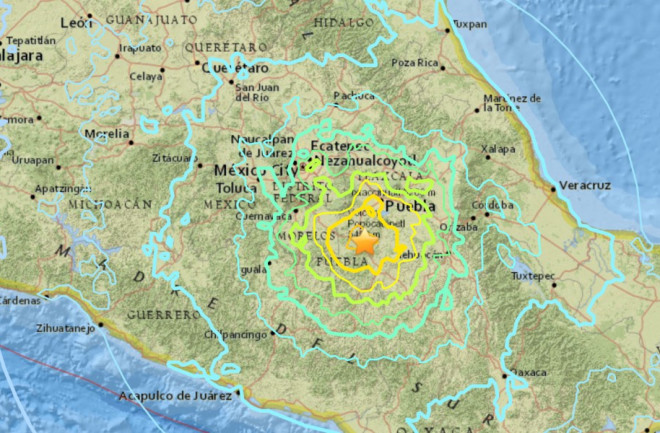 Shake map of the September 19, 2017 earthquake in Mexico. USGS. For the second time this month, a large earthquake has struck Mexico. Unlike the M8.1 earthquake that occurred off the Pacific coast and far from Mexico City, this one was located under central Mexico and only ~150 kilometers from the massive Mexican capital. This new earthquake was a M7.1 located ~51 kilometers beneath the surface. That will hopefully help dampen some of the potential damage as over 8.5 million people live within 100 kilometers of this temblor. UPDATE: The death toll is now over 100 from the earthquake. Some fires have already been reported due to the earthquake damage. This video shows people outside after early warning alarms went off. The earthquake strikes about ~20 seconds into the video, when you can hear windows cracking and shaking of the building:

Now, it is unclear what the casualties might be, but it looks like significant damage has happened in Mexico City. People have been tweeting video from building in Mexico City showing billowing clouds of dust or smoke that could be from damaged buildings.

Current image of Mexico City. To all my family and friends, I hope everyone is safe. pic.twitter.com/dqCk47kcEK

Now, it is way too early to say that this earthquake was triggered by the M8.1 that occurred earlier in the month. There could be the chance that the previous earthquake added more stress to a fault that was close to rupture. However, it will take time to determine if this was actually the case. Check out some of the discussion of triggering earthquakes on this USGS page

. Shockingly enough, today is the 32nd anniversary of the disastrous 1985 M8 earthquake

that was centered about as far from the city as this one was today. Just hours earlier, people had participated in earthquake drills in memory of that earthquake, which killed at least 5,000 people. I'll update this post as new information comes in, but as with many large earthquakes, the region should expect aftershocks. UPDATE: this video of an amusement park near Mexico City show how surface waves translated into water waves and just how much shaking there was.

UPDATE: Initial analysis of the earthquake seem to indicate that it was potentially caused by the same process that caused the M8.1 earlier in the month. The oceanic plate slab diving underneath Mexico appears to have "cracked", causing an extensional earthquake.