Announcing the 2018 Volcanic Event of the Year! 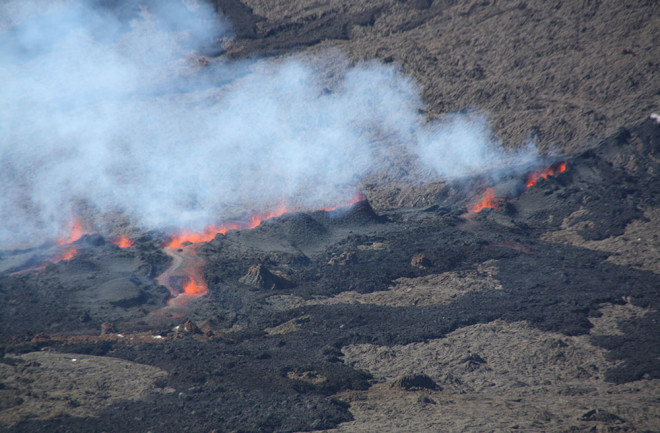 No, not Kīlauea, but rather a July 2018 eruption of Piton de la Fournaise on Réunion Island. Wikimedia Commons. It's that time, once again, to give out the Pliny. Since 2009, my readers have voted on what they think was the most significant volcanic event of the year. Sometimes the vote is very close and sometimes, well, you can guess what the outcome will be before the envelope is opened. Let's start off with some honorable mentions that garnered votes from some of you: Sierra Negra: Back in June of 2018, Sierra Negra in the Galápagos erupted for the first time since 2005. Lava flows poured down the flanks of the volcano, prompting some evacuations but this eruption was overshadowed by events that will come later in the countdown. Kadovar: At the very start of the year, Kadovar in Papua New Guinea, produced the first major eruption of 2018. This was a big surprise as no known historical eruption had occurred at Kadovar. Residents had to be evacuated from the island and the volcano went on to have explosions for much of the rest of the year. Mayotte: Now, here was an example of a "volcanic event" that didn't even produce an eruption ... and geologists aren't even sure if it will. The earthquake swarm and mysterious tremor felt to the east of Mayotte Island in the Indian Ocean intrigued many and may be the signs of potential new volcanic activity deep under the sea's surface. Piton de la Fournaise: Most people didn't know that this shield volcano on Réunion Island had one of its busiest years in decades. Much like Kīlauea, the volcano started erupting in late spring and had a month of continuous eruption in April-May and then erupted again in July and then again through much of September and October. Now the Top 5: 5. Etna, Italy: Like the Meryl Streep or Jack Nicholson of the Plinys, Etna seems to make it high on the list every year. The Italian volcano didn't have the stunning paroxysms of years past, but it did have fairly persistent strombolian activity at the summit craters for much of the year. Then, as December was winding down, a new vent opened on the flanks of the volcano for the first time in years, sending lava flows down Etna's slopes. This could be a sign of a potentially busy 2019 on Sicily.

Etna erupting in late December 2018. Boris Behncke, used by permission. 4. Ambae (Aoba), Vanuatu:Eruptions at this volcano in the South Pacific has created one of the largest humanitarian crises of the year. Persistent explosive activity meant that the island had to be evacuated numerous times and the government of Vanuatu even floated the idea of permanently abandoning the towns on Ambae. This would mean that over 13,000 people would need to find new homes across the archipelago that makes up Vanuatu.

The ash plume from Aoba (Ambae) in Vanuatu, seen by NASA's Aqua satellite on April 11, 2018. NASA Earth Observatory. 3. Fuego, Guatemala: Sadly, Fuego makes such a high showing on the 2018 Plinys because it was one of the deadliest volcanoes of the year. In June, pyroclastic flows unexpectedly swept down the sides of the Guatemalan volcano, killing almost 200 people with hundreds missing. These avalanches of seering hot volcanic gases and debris move at hundreds of kilometers per hour, so the people in the towns at the foot of Fuego had little-to-no time to escape their destruction. The volcano produced ash plumes for much of the year and occasionally volcanic mudflows created by all the debris from the eruptions mixing with heavy rainfall.

An eruption of Fuego in Guatemala during February 2018. Marco Verch, Flickr. 2. Anak Krakatau, Indonesia: In one of the most unexpected volcanic events of 2018, the island of Anak Krakatau that formed inside the 1883 caldera of Krakatau collapsed into the sea in late December. This loss of more than half the island created a 3+ meter tsunami that swept onshore along both sides of the Sunda Strait. The end result was hundreds of deaths and many more missing. Although the Indonesian volcano had been active much of the year, the eruptions had mainly been strombolian explosions at the summit and lava flows. However, it seems that all that activity caused the volcanic cone of Anak Krakatau to become unstable and eventually, it slid off into the sea, exposing the vent to ocean water. This has changed the character of the eruptions to ones that are more explosive as magma and seawater mix (called a Surtseyan eruption). Even though the tsunami caught most everyone by surprise, the potential for this kind of disaster generated by Anak Krakatau was studied as far back as 2012.

Rooster tails from a Surtseyan eruption from Anak Krakatau after the December 2018 collapse. PVMBG. 1. Kīlauea, UnitedStates: This year's Pliny vote for number one was not close ... and that was no surprise for people who followed the volcanic (or any) news this summer. After the summit lava lake overflowed in late April, everything changed. A large earthquake struck on the flanks of Kīlauea and within days, a new eruption had started in the lower East Rift Zone (LERZ), over 30 kilometers from the summit, for the first time in half a century. Unfortunately, it opened in the middle of the Leilani Estates subdivision and over the course of the summer, over 700 homes were destroyed by lava flows. The entirety of Kapoho Bay was filled in by lava as it reached the Pacific and as the lava drained out in the LERZ, the summit collapsed hundreds of meters during a series of explosive eruptions. By September, the largest eruption in the U.S. since 1980 had ended. Now, Kīlauea has gone quiet for the first time in over 30 years. Now we can only wait and see if 2019 bring more eruptions to the Hawaiian volcano or Kīlauea stays quiet for now.

Lava reaching the ocean during the LERZ eruption of Kīlauea, June 2018. USGS/HVO.