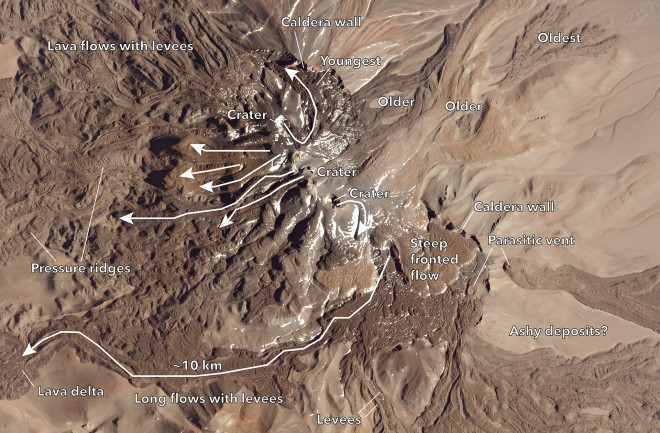 An annotated image of Argentina's Cerro el Condor taken from one of Planet Lab's dove satellites. Click here to see the original version of this image. Planet Labs/CC BY-SA 4.0 So, I've begun to build a little collection of volcano images taken by Planet Labs' fleet of doves that look down on Earth's surface. With this ammunition, I thought I'd start a series of annotated images of volcanoes, starting with this gorgeous image of Cerro el Condor in Argentina (above). The high Andes of Chile, Argentina, and Bolivia are a magical place for volcanologists. The arid climate means that volcanic features are preserved for millions of years in nearly showroom condition. You can look no further than my PhD volcano, Aucanquilcha, where the lava flows are likely up to a million years old but look like some flows in other parts of the world that occurred only a few years ago. Cerro el Condor is in the same category as Aucanquilcha, but with many more lava flows. In this image, I've marked some of the more prominent flows that erupted from at least three summit vents and at least three parasitic vents on the flanks of the volcano. These flows can be long, upwards of 10 kilometers in some cases, ending in a broad lava delta. Other flows are shorter and stubbier, with steep fronts. This different morphology of lava flows likely reflects differences in composition, where the long flows are from more mafic lava flows that are lower viscosity, so they run out further and create flow levees on their edges. The stubbier flows are more felsic lava that have a higher viscosity, oozing out like toothpaste to create nearly domelike flows. Many of these flows help fill up an old ~2.5 kilometer-wide caldera in which the modern Cerro el Condor resides. That caldera can still be seen in a couple places to the north (top) and middle of the image. From the looks of these flows, you might guess some could be very young. In the upper righthand quadrant of the image I marked a sequence of flows, from the youngest, darkest flow at the summit to the oldest and furthest from the summit. That young flow hasn't been dated, but likely erupted in the last 10,000 years ... and that's all we know because no eruption has ever been observed at Cerro el Condor.