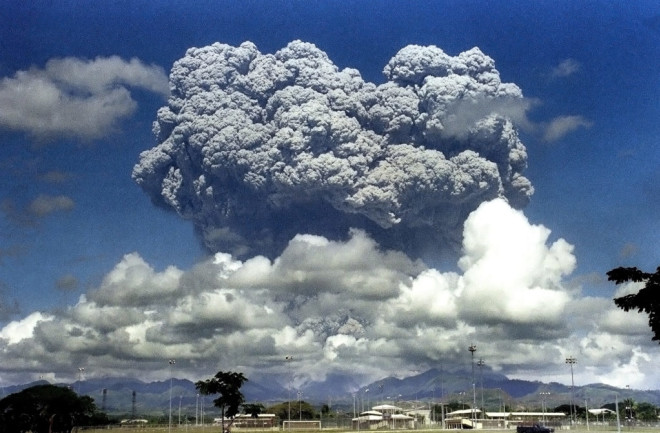 This picture taken 12 June 1991 shows a giant mushroom cloud of steam and ash exploding out of Mount Pinatubo volcano during its eruption as seen from inside the then US military Clark Air Base in Angeles, located in Pampanga province. ARLAN NAEG/AFP/Getty Images The 1991 eruption of Pinatubo in the Philippines was the second largest of the 20th century (only losing to Novarupta in Alaska in 1912). It had a significant impact on global climate, dropping average temperatures by ~0.25°C (on average) for the next five years. It could have been a massive disaster if it wasn't for some great work by volcanologists who carefully monitored the volcano and understood when the big eruption was going to happen. Yet, even a few months before this giant eruption, no one was watching Pinatubo. Much like Novarupta, the volcano was hiding in plain view---a nasty trick when it comes to many of Earth's really big eruptions. This June 15 marks the 25th anniversary of the Pinatubo eruption, so it is a great candidate for an annotated volcano. I have some great images taken before and after, showing how the landscape changed and how it has recovered in the quarter century since the eruption.

Space Shuttle (STS-03) image of Pinatubo, taken in 1982, 9 years before the cataclysmic eruption. Click here for a larger version.NASA, annotated by Erik Klemetti In this 1982 image of Pinatubo taken during the STS-03 shuttle mission, you can just convince yourself that there is a large volcano hiding in the image. Unlike the Andes or Eritrea, the Philippines are a tropical zone with abundant precipitation, so volcanic edifices can be quickly eroded, especially if they're made of mostly loosely consolidated ash and tephra (volcanic debris). That's why it is almost hard to pick it out (I helped with the dashed circle) in the image. From this image, you can get a sense of just how big Pinatubo is and how close it is to Olongapo and Manila. You can also get a hint of its explosive history from the grey ash in some of the rivers draining the area. This is old ash from previous eruptions, constantly being eroded from the river channels and transported from the deposits of eruptions hundreds of years old. This is exactly how Pinatubo was constructed. In those cases, the Earth develops broad pyroclastic sheets that weather with radial channels and canyons as water cuts down through the deposits from older eruptions. You can see that pattern in the 1982 image, implying that a volcano that has produced massive eruptions is being slowly eaten away ... but how long had it been since the previous eruption? When the volcano came back to life in 1990-1991, it had likely been ~540 years since Pinatubo's last eruption. That's before any European had set foot on the island, so all the cultural history of that eruption was with the native people of what would become the Philippines. However, for modern volcanologists, very little was known about Pinatubo before the volcano showed signs of renewed activity.

The area about Pinatubo seen only one year after the 1991 eruption, seen from the Space Shuttle (STS-46).NASA We'll jump now to right after the 1991 eruption. This shuttle image taken about a year after the eruption shows just how much the landscape changed. Where there was lots of green there is suddenly abundant areas of grey. Right near the new crater (center of the image) are the sheets of pyroclastic debris (ash, lava blocks, anything else caught up in those flows). The river channels are filled with volcanic mudflow deposits. These mudflows continued for decades after the eruption as the 1991 eruption dumped over 5 cubic kilometers* of volcanic debris onto the landscape. In some spots, especially in the lower right hand side of the image, you can see where mudflows hit flatter land and spread out to cover wide areas. Yet, when you look at the image, a large portion is still very green, showing how even a massive eruption like Pinatubo is somewhat limited in its impacts. *Having trouble thinking in volumes like that? Well, 5 cubic kilometers would be like pouring 2 meters (6.5 feet) of concrete over the entirety of the state of Rhode Island.

The Pinatubo area seen from the International Space Station in 2005.NASA We'll jump forward again, this time to 2003, so a dozen years after the eruption. In this International Space Station shot, the volcano itself is covered by clouds but even so, it is readily apparent how quickly the area has recovered. The river channels themselves are still grey from ash, but only really the main channels. A lot of the grey that was more dispersed in the 1992 image has now be turned back to green, meaning the vegetation has recovered to some degree. Plenty of ash has made it into the ocean (you can see a little just off the coast) but the 1991 debris will be moving down the channels for centuries.

2016 Planet Labs image of Pinatubo in the Philippines. Click here to see a larger version.Planet Labs | cc by-sa 4.0, annotated by Erik Klemetti Finally, we get to Pinatubo today. This 2016 Planet Labs image is a close up of the caldera area around Pinatubo. What should be readily apparent is that now a quarter of a century later, much of the landscape has recovered from the cataclysmic eruption (much like we see around Mount St. Helens in Washington). The area is mostly covered in green vegetation and where rivers have cut into the ash and debris deposits from 1991, that grey material can be seen. The crater from the 1991 eruption is ~2 1/2 kilometers across and in it even sits a little crater lake where people take tours! So, in 25 years, the volcano went from one of the largest eruptions of the 20th century to a tourist destination. This is just a good reminder that even though big eruptions happen, it doesn't take long for nature (and people) to recover from these seemingly massive volcanic events.