Annotated Volcano: A Volcano's Shape Can Tell You How It Will Erupt 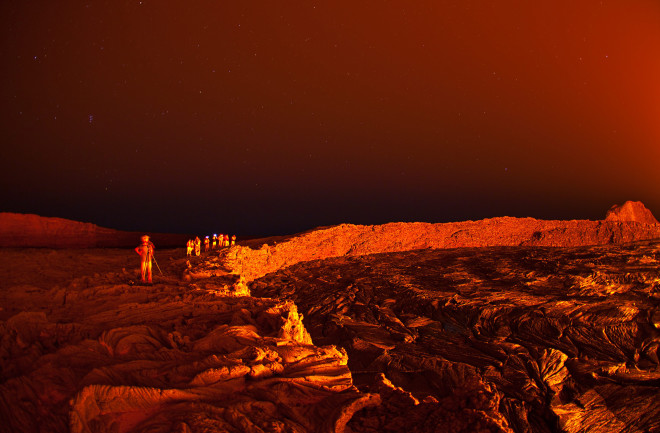 People watch the Erta'Ale volcano from the rim of its south crater wall, in the Afar Region of Ethiopia, on November 25, 2010.Tom Pfeiffer/Barcroft Media/Getty Images You get a double feature for the latest Annotated Volcano. Why two volcanoes? I wanted to explain the difference between two different shapes of volcanoes: the archetype stratovolcano and the massive shield volcano. Why would two volcanoes take such different forms? It boils down to the flavor and form of the stuff that comes out the top.

Mexico's Popocatépetl is an example of what volcanologists call a stratovolcano*, with a well-formed conical shape and a crater/vent at the top of the volcano. You can see that shape in the profile shot of the volcano (taken from the Earth's surface; below) with steep slopes. The average slope heading up the sides of the volcano are ~25 percent with a maximum of 63 percent in the steepest bits. From the "base" level of ~3500 meters (11,400 feet) to the summit you gain 1635 meters (~5,300 feet). All in all, hiking this volcano would definitely be a slog, especially as you approach the summit and the slopes get even steeper. You can also notice a nearly circular shape to the volcano (above), with paths of debris heading in all directions from the summit crater.

Planet Labs image of Mexico's Popocatepetl take on January 1, 2016. Mouse over to zoom.Planet Labs |CC BY-SA 4.0; Annotation by Erik Klemetti So, why does Popocatépetl have such a shape? The volcano erupts mainly andesite and dacite, which are relatively high in silica. This means when it erupts, you tend to get sticky domes of lava at the summit that can collapse to create pyroclastic flows and volcanic mudflows (lahars)---these flow channels are clearly visible on the satellite image. You also get explosive eruptions that rain ash and bombs onto the slopes of the edifice. All in all, you get lots of relatively loose debris that piles up on the slopes, with the occasional lava flows. All in all, stratovolcanoes are built like poorly constructed layer cakes of volcanic debris (tephra). [related block="1"] These piles of loose debris will form a mound with slopes that are roughly at the angle of repose---the angle that you can stack a material before it you can't stack any more thanks to gravity's pull. Think about trying to build a sand castle on the beach: as you pile up dry sand, you find that you can't get the slopes to get any steeper than ~30-35º before the sand runs down the sides of your attempted castle. Same thing happens on a volcano like Popocatépetl, with the additional fun of erosion due to weather and glaciers that further reduce the angle of the slopes. That's why if you do the math, the average slope on Popocatépetl is ~14-16º, although you get close to the angle of repose when you're at the summit closest to the newest deposits.

A view of the Popocatepetl Volcano from the Izta-Popo National Park, in the central Mexican state of Puebla, on January 31, 2016. Its conical shape is clear from this vantage. RONALDO SCHEMIDT/AFP/Getty Images

Now, let's take a look at a volcano on the other side of the planet. Ethiopia's Erta Ale is a shield volcano whose profile is large and low. If you look at the Earth-based image of Erta Ale (below), you can see that it is almost hard to tell there is a volcanic edifice there (unlike that

Popocatépetl shot). The slopes on Erta'Ale average about 8.1 percent, so over three times shallower than our Mexican volcano. If you make the same calculation of the angle of the slopes, you get 4.3º as you rise only 282 meters (925 feet) over 3.75 kilometers (~2.3 miles). You can also tell that the volcano's base isn't a circle---it is much more like a, well, shield, with an elongate shape. This is due to the fissures formed by regional stresses that cause the volcano be where it is (that is, the East African Rift).

Planet Labs image of Erta'Ale in Ethiopia, seen on January 18, 2016. Mouse over to zoom.Planet Labs | CC BY-SA 4.0; annotation by Erik Klemetti Why are the two volcanoes so different? Etta Ale erupts basaltic lava, which is low in silica, so it is much less sticky (and prone to explosive eruptions) than what comes out at

Popocatépetl. As the satellite image shows, you get lots and lots of lava flows that stack up on top of each other like shingles. You don't really have loose debris piling up to get a cone, but instead thin layer after thin layer of lava building a low, broad volcano. The largest of these types of volcanoes on Earth is Mauna Loa on the big island of Hawai'i, where the volcano has a base over 200 kilometers across!

You can also see a couple other cool features of big shield volcanoes: a summit caldera, usually formed by passive sinking of the top of the volcano rather than a big explosion, and a small lava lake in one of the summit craters. Some of the lava flows from within the caldera can make it out, like you can see in the bottom of the image. Otherwise, you can find lava flows erupting inside the caldera and from fissures on the slopes of the volcano as well.

A shot of Erta'Ale on December 19, 2007 showing off its low, broad profile.Philippe Bourseiller/Getty Images The next time you see a shot of a volcano, the shape alone will give you some clue to the type of eruption that it produces. Steep cone? Likely sticky lavas that erupt as domes or explosions (or both). Broad volcano that is hard to even notice? Likely lava flows that spread out across the surface. There are a couple exceptions to this rule: Calderas are big holes in the ground formed by large silicic explosions, like Yellowstone. There are also small volcanoes---cinder or scoria cones---formed by violent, gas-rich eruptions of basaltic lava that build up piles of debris. My sketch summarizes all these shapes to (roughly) scale, so now you can identify what kind of volcano you're seeing based on those volcanic shapes.

The relative size and shapes of volcanoes, to scale. Erik Klemetti/WIRED*Technically, stratovolcano refers to a very specific type of shape---that perfect cone. Many volcanoes we call a stratovolcano are actually composite cones, but how they form is very similar.