And the 2015 Pliny for Volcanic Event of the Year Goes To... 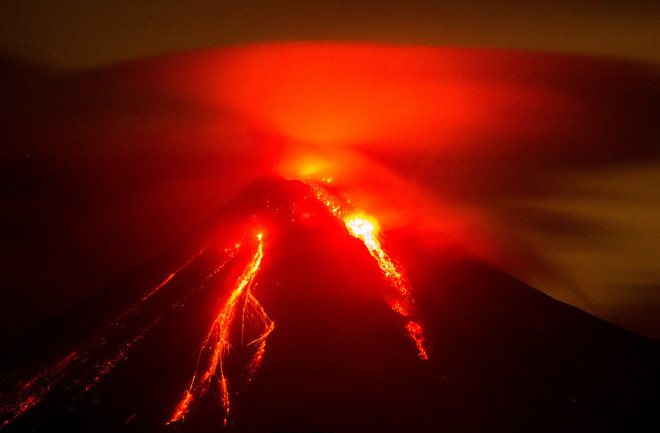 View of the Colima erupting from San Antonio community, Colima State, Mexico, on July 12, 2015. HECTOR GUERRERO/Getty Images 2015 is over, so it's time to look back at the volcanic year that was. If anything, the volcano news this year was dominated by moderate but persistent eruptions rather than a big blast that captured the world's attention. In a sense, these prolonged eruptions are more hazardous than a big explosive eruption because they can displace people for months or even years. Unlike a big eruption like Pinatubo that captures the spotlight, the media can tend to forget about these lingering volcanic crises, such as the years of eruptions at Sinabung in Indonesia. Even after the eruption is out of the news, the people living near the volcano still need assistance, whether it be to make their temporary housing safe and comfortable or to move permanently to a new home further from the volcano. The voting for the 2015 Pliny for Volcanic Event of the Year reflected this idea, as many of the top 10 are volcanoes that erupted across much of the year. So, let's get to the countdown! Honorable Mention These volcanoes just missed the top ten:

A plume of ash and steam rises from the crater of the Popocatepetl volcano on March 25, 2015. Dario Lopez-Mills/AP Both of these volcanoes just kept erupting over the course of 2015, some of which were eye-catching explosions or pyroclastic flows. Popocatépetl's visibility is helped by the constant view from the webcams (and ignore all those ridiculous posts about UFOs). Sinabung is more of a humanitarian crisis, as many people living near the volcano have seen their towns erased from the maps and have now spent years in temporary shelters. #8 - Fogo, Cape Verde Islands (73 votes)

Fogo in the Cape Verde Island, seen erupting on December 24, 2014 by EO-1. NASA Earth Observatory Fogo fared well in the 2014 Pliny, finishing as the runner-up to Holuhraun. The eruption at Fogo ran into 2015, but the

Observatório Vulcanológico de Cabo Verde declared the eruption over by February 8, after almost three months of lava flows and ash.

Pyroclastic flows at Guatemala’s Fuego, seen on July 1, 2015. Liberalucha The other "fire" mountain in the 2015 top 10 put on a more consistent show. Lava fountains, pyroclastic flows, and lava flows were a constant presence on the Guatemalan volcano Fuego for much of the year. Many of the eruptions prompted evacuations near the volcano, along with closures of the airport in Guatemala City. Volcanologists in Guatemala think Fuego has entered a more active phase that could persist for months or longer. #6 - Telica, Nicaragua (116 votes) Central America dominated the Pliny voting this year. Case in point, Telica in Nicaragua garnered a lot of votes considering it only had a few significant blasts this year. The volcano did rumble for almost the entirety of 2015, with lots of low-level ash emissions and small explosions in its first bouts of activity since 2011. #5 - Calbuco, Chile (169 votes)

Ash and lava spewing from the Calbuco volcano, on April 22, 2015. Diego Main/AFP/Getty Images The volcanoes in the top 5 set themselves apart in the voting and for good reason. In late April, Calbuco in Chile unleashed a somewhat unexpected but dramatic eruption that sent an ash plume upwards of 20 kilometers (65,000 feet) over the surrounding countryside. The eruption waxed and waned over the next few weeks, with some more explosions. The ash from the eruption even caused problems after the main event was over. The eruption of Calbuco might have been the most picturesque eruption of the year as well. However, by August, activity at Calbuco has settled down to nearly background levels, with only steam emissions from the crater. #4 - Etna, Italy (247 votes)

The plume from the December 4, 2015 eruption of Italy's Etna, captured by Terra's MODIS imager. NASA Talk about coming from behind. Up until December, Etna looked like it was going to have one of its most quiet years in recent memory. Then, everything changed as the Voragine, Bocca Nuova, and New Southeast Craters produced one of the largest explosive eruptions from Etna in decades. These explosive events were fairly brief, only lasting a few hours with some small lava flows, but the ash plumes were impressive. The eruption waned as the year ended and the activity moved back to the Northeast Crater before a final explosion from the New Southeast Crater on December 28.#3 - Holuhraun, Iceland (267 votes)

The Holuhraun eruption in Iceland, seen in September 2014. The eruption is one of the most prodigious emitters of sulfur dioxide in decades. Ahjarta The lava field officially got a name in December, but it was really the activity up through the first few months of the year that landed the 2014 Pliny champion in at #3 for 2015. As the year started, the eruption was one of the only features that could be seen across a snowy Iceland. In late February, the lava flows had dropped to a trickle and the earthquake frequency diminished rapidly. By March, people were able to go explore the crater of the eruption that dumped over a 1.4 cubic kilometers of basaltic lava and by June, the Icelandic Meteorological Office and Icelandic Police lowered the alert status back to "green" as no further signs of unrest were seen at the new lava field. However, speculation persists that the lava field could erupt again as lava returns underneath Barðarbunga. #2 - Momotombo, Nicaragua (284 votes)

A smoldering Momotombo, on the shores of Lake Managua, seen on December 4, 2015 by EO-1 NASA Earth Observatory The clear winner of best volcano name of 2015, Momotombo made its return from over 100 years of slumber with a series of impressive explosions and lava flows starting in early December. A few weeks of precursory earthquakes lead up to a kilometer-tall lava fountain that sent a dark plume of ash into the skies. The fresh lava flows were clearly visible on EO-1 images of the volcano, moving down the northeast flanks of the volcano for a few kilometers. Momotombo's eruption looks to continue into 2016 as the volcano produced a new explosion in the early morning hours of January 3. #1 - Colima, Mexico (335 votes) When the voting was finished, it was clear that Colima (top) dominated the race. It seemed to be a common occurrence in 2015 to see some snippet of webcam video from yet another explosive eruption from Mexico's Colima. The plumes from these explosions regularly towered 5-7 kilometers (16,000-25,000 feet) over the volcano, while pyroclastic flows and lahars were not uncommon partners to these eruptions. So why was Colima so active this year? The volcano appears to be in a phase of volcanic "lather-rinse-repeat", where lava flows form a dome in the summit crater that plug the conduit, allowing pressure to build until the volcano "pops", creating an ash-rich, explosive eruption. Then, the process starts all over again. Mexican volcanologists think that Colima is in a more violent phase right now and as we head into 2016, it is hard not ponder what could happen in Colima repeats its 1913 VEI 5 eruption. So, congratulations to the winner of the 2015 Pliny for Volcanic Event of the Year: Colima!