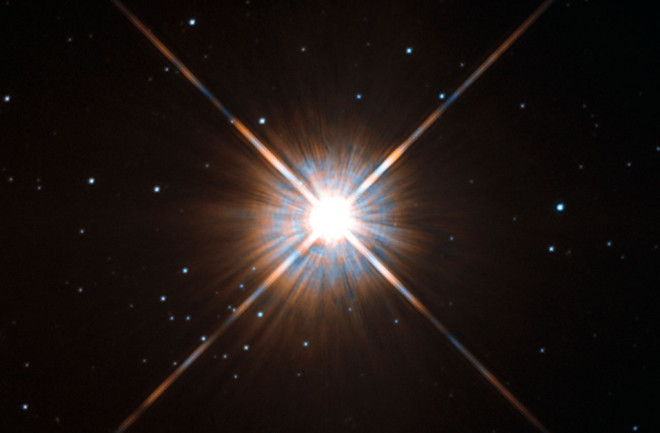 Proxima Centauri shines brightly in the image from Hubble. (Credit: Hubble ESA) Microsoft added the “Start” button to Windows in 1995, which was the same year scientists discovered the first exoplanet orbiting a star like ours - technically, astronomers found several terrestrial planets orbiting a pulsar in 1992. But in 20 years, give or take, we’ve grown spoiled by the abundance of exoplanets in the universe. Kepler, the planet-hunter, has confirmed over 2,200 of them. Today, it’s safe to assume nearly every star has its companions. The ante for hyping a new exoplanet discovery is a little higher these days, but if rumors are true, this one makes the grade: astrophysicists from the European Southern Observatory (ESO) plan to announce they’ve spotted an Earth-like exoplanet orbiting the nearest star, Proxima Centauri, in its habitable zone. This, according to an anonymous source quoted in a report that appeared Friday in Der Spiegel."The still nameless planet is believed to be Earth-like and orbits at a distance to Proxima Centauri that could allow it to have liquid water on its surface—an important requirement for the emergence of life," the source said. And, for what it’s worth:

My sources say it's for real: Earth like planet discovered at Proxima Centauri https://t.co/pvCCFzxKs4pic.twitter.com/tcab4tv9ha

At just over 4 light-years from Earth, Proxima Centauri is our sun's nearest neighbor, and it's part of a triple-star system that includes the better known Alpha Centauri. The star's proximity has made it an obvious target for many past exoplanet searches. All of them have come up short, which makes the most recent rumors all the more remarkable. If the early reports ring true, scientists will announce this Earth-like planet near the end of August. Discover has reached out to an ESO spokesperson for comment.

Reason to Hold Our Breath

Although media reports say the rumored planet orbits in a region that's potentially favorable for life, these smaller stars are less stable, and Proxima Centauri is known to have violent flares at times. Its occasional tantrums have made astronomers skeptical of finding life around red dwarf stars in the past.

However, skepticism has softened some in recent years, and SETI recently launched a major initiative to search for life around 20,000 red dwarfs, as these stars are the most common in the Milky Way galaxy.

Still, Proxima Centauri is only “close” on a cosmic scale. It would still take humans

far too long to reach the planet with current technologies. Flying laser-sailing nanocraft to the yet-to-be-confirmed planet might be our next best bet, and that’s a pretty solid “plan b”.