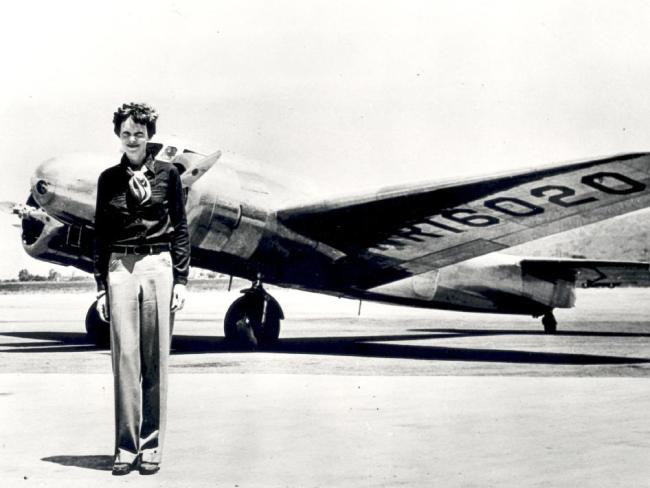 a white streak that wreckage-hunters believe is the fuselage of Amelia Earhart’s Lockheed Electra. Researchers discovered what they call an anomaly while combing through sonar images from a dive last summer off the island of Nikumaroro in the central Pacific. If confirmed, it would be the first trace of the famous aviatrix to be found. In the last leg of her attempt to be the first woman to fly around the world, Earhart’s plane disappeared in July 1937. The International Group for Historic Aircraft Recovery has theorized that Earhart and navigator Fred Noonan landed off what was then called Gardner Island in the Republic of Kiribati. They eventually died and Earhart’s twin-engine plane slipped down an underwater shelf. Last summer, the non-profit hired a contractor to use an underwater search vehicle to explore a square mile of seabed, from depths of 100 meters to 1,200 meters. At the time, no promising remains were spotted. But this March, Richard Conroy, a member of the aircraft recovery group’s online forum, noticed an odd image on the sonar map. It showed an object at a depth of 187 meters, or just over 600 feet. That’s one area that the underwater robots hadn’t explored. This landing spot for the putative fuselage matches an overall theory of how the plane might have broken up against the reef. The recovery team also said

the anomaly appears to be the correct size. The only way to know for sure whether this anomaly is really part of the Electra’s fuselage is to return to the deep. In the meantime, the recovery team plans to have independent experts review all its sonar data. Image courtesy NASA