All Galaxies Rotate Once Every Billion Years 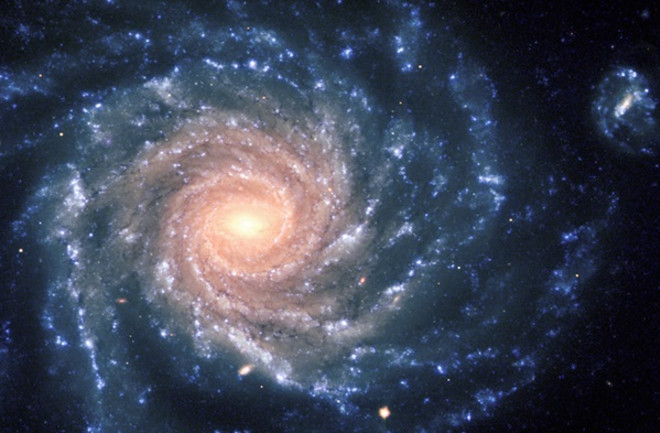 In a study published March 9 in The Monthly Notices of the Royal Astronomical Society, astronomers announced the discovery that all disk galaxies rotate about once every billion years, no matter their size or mass.

“It’s not Swiss watch precision,” said Gerhardt Meurer, an astronomer from the International Centre for Radio Astronomy Research (ICRAR), in a press release. “But regardless of whether a galaxy is very big or very small, if you could sit on the extreme edge of its disk as it spins, it would take you about a billion years to go all the way round.” “Discovering such regularity in galaxies really helps us to better understand the mechanics that make them tick,” he said. “You won’t find a dense galaxy rotating quickly, while another with the same size but lower density is rotating more slowly.”

To carry out the study, the researchers measured the radial velocities of neutral hydrogen in the outer discs of a plethora of galaxies — ranging from small dwarf irregulars to massive spirals. These galaxies differed in both size and rotational velocity by up to a factor of 30. With these radial velocity measurements, the researchers were able to calculate the rotational period of their sample galaxies, which led them to conclude that the outer rims of all disc galaxies take roughly a billion years to complete one rotation.

Based on theoretical models, the researchers also expected to find only sparse populations of young stars and interstellar gas on the outskirts of these galaxies. But instead, they discovered a significant population of much older stars mingling with the young stars and gas.

“This is an important result because knowing where a galaxy ends means we astronomers can limit our observations and not waste time, effort, and computer processing power on studying data from beyond that point,” said Meurer. “So because of this work, we now know that galaxies rotate once every billion years, with a sharp edge that’s populated with a mixture of interstellar gas [and] both old and young stars.”

Considering new generations of radio telescopes — like the long-anticipated Square Kilometer Array (SKA) — will produce massive amounts of data, the fact that researchers now have a good idea where a galaxy’s edge lies should also help them significantly reduce the power required to sort through such data.

“When the SKA comes online in the next decade,” Meurer said, “we’ll need as much help as we can get to characterize the billions of galaxies these telescopes will soon make available to us.”