Aliens in the Mist 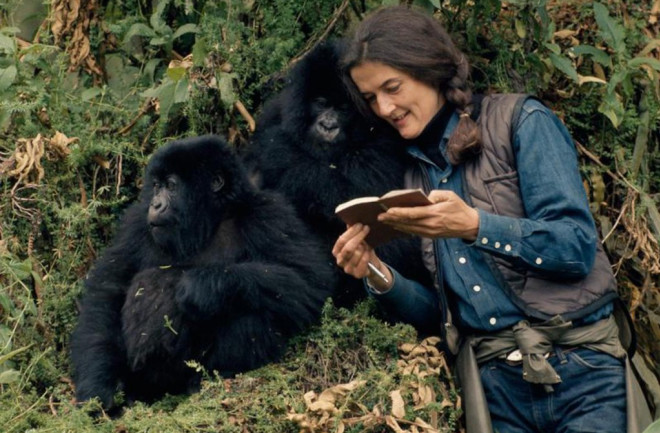 Almost human? Dian Fossey plays with two young mountain gorillas in the wild. Credit: Robert I.M. Campbell What’s the most disconcerting trend? Congo is a big concern. Unlike mountain gorillas, the vast majority of Grauer’s gorillas live outside of national parks in unprotected community forests. We’ve lost 80 percent of Grauer’s gorillas in the last 20 years. Part of that is due to civil unrest. Militia groups were operating right in the middle of their habitat. Grauer’s gorilla could go extinct in the next 10 to 20 years if we don’t stop the decline. We just don’t have enough resources to support all the things we need to be doing. The reason mountain gorillas are increasing in Rwanda is because we have a lot of resources going into their protection. We need more if we want these populations to recover, and it’s coming at a time when, in the U.S., funding for conservation is being cut. That to me is an extremely worrisome trend, not just for gorillas. We’re at a real risk of losing elephants, losing gorillas, losing orangutans, losing rhinos in my lifetime. In the face of those challenges, how are you trying to turn things around in the Congo? We’re engaging with community landowners to provide protection. These landowners commit to not hunting endangered species like gorillas and chimps on their land. In exchange, they’re hired, they become trackers. We help send their kids to school, we help with livelihood initiatives, we help them diversity their crops so they’re not so dependent on hunting for food. And it’s working! We’ve been in this one particular area for almost six years, over 1,000 square kilometers, and we don’t know of any gorilla that’s been killed. It gives me hope. I’m amazed that, given all the things that eastern Congo has going through over the past 20 years, there are still people on the ground who value biodiversity, value wildlife, value their forests. They just need help. They can’t do it on their own. It’s striking that so many of the leaders in primatology are women--Dian Fossey and Jane Goodall in particular, but there are many others. Why do you think that is? Jane Goodall and Dian Fossey were the pioneers who showed the way. They showed women, particularly of my generation, what you could do: You can go live in the forest of Africa, study these amazing animals, make wonderful discoveries. I also think women have an attraction to animals. I don’t know if it’s part of the nurturing side of our biology, but I think there’s a real affinity there. And women are very patient. It takes a lot of patience to watch these animals. We have a lot of young Rwandan women now coming up the ranks in science. In the university we have about 50-50 in terms of young women in science, a lot of them in botany and zoology. It’s exciting to see the next generation of young Rwandan women viewing this as a great career opportunity. I think Dian would be very inspired by that. After 50 years of studying gorillas, what is there left to learn? The biggest lesson we’ve learned is how adaptable these gorillas are. There is no one universal gorilla behavior. What Dian Fossey saw 50 years ago is different than what we’re seeing now, and is different than what we’ll be seeing in 20 years. It’s not that surprising, really. These animals are incredibly intelligent, they share 98 percent of our DNA, they’re highly flexible, they live in a dynamic environment that requires them to adjust. Just as the gorillas keep adapting, we need to keep adapting. To do adaptive conservation, you have to understand what’s going on with the species’ basic biology. Is it reasonable to say that you are seeing cultural evolution in gorillas, or is that projecting human values? It’s been shown in chimps and orangutans that there is culture, there is social transmission of information. We collaborated on a paper recently showing that there’s some evidence of this in gorillas as well. We definitely see trends in the gorillas. If you have a kind, benevolent male leading the group, that often translates into the personality of the larger group; if you have a more despotic male, that translates into the group as well. We don’t want to project human aspects onto other primates, but these are our closest living relatives, so of course there are going to be similarities. Whenever we compare other primates’ behavior to our own they always lose out, because we’re always viewing them through a human lens. People sometimes say, ‘The average chimp is as smart as a 6-year-old child.’ Well, what 6-year-old could you drop off in an African rain forest and expect to survive on their own? We’re viewing it through the lens of our society instead of viewing it through the apes’ environment and the way they see things. The more we learn about these animals, the more were discovering about them. Now scientists are finding that chimps use stone tools. We’ve been on the ground for 50 years and it’s still the tip of the iceberg in these scientific discoveries. We need more people and need more work done on these different populations before they disappear. You can recreate the fossil record but you can’t recreate behavior. We’re losing the opportunity to find out all these fascinating things about diversity in primate behavior because we’re losing these populations so quickly.