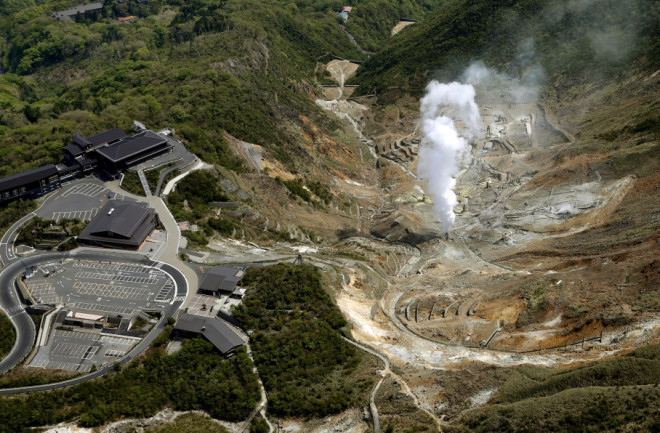 Photo taken from a Kyodo News helicopter shows steam bursts in the Owakudani hot spring district of Mt. Hakone, a popular tourist spot southwest of Tokyo, on May 6, 2015. Japanese authorities raised the volcanic alert for the mountain the same day, anticipating a possible small steam eruption. Kyodo Extra/AP After last year's tragedy at Ontake, the Japanese Meteorological Agency is taking no chances in alerting people when a volcano is becoming restless. At Ontake, there may have been few clear warning signs beyond very minor earthquakes in the weeks preceding the deadly eruption, making it that much more difficult to warn the many people who visit the volcano each year of the potential threat. Many of the volcanoes in Japan are busy tourist destinations, especially those volcanoes close to the megalopolis of Tokyo. Hakone is only ~70 kilometers (45 miles) from Tokyo, making it one of the closest to the over 13 million people living in the city. Now, the JMA has issued an alert for Hakone after signs of increasing unrest. Hakone (also known as Hakoneyama) is the host to hot springs in the Owakudani Valley and is nestled against Lake Ashi, making it an ideal getaway for Tokyo residents. Although the volcano hasn't erupted since the 1200's, it has a history prior to that of ash falls and pyroclastic flows, similar to other Japanese volcanoes like Unzen. Those eruptions in the 12th-13th century are thought to have been mainly phreatic (steam-driven) eruptions, so we have to go back almost 3,000 years since the last eruption where new magma was involved. However, those hot springs and fumaroles (gas vents) make it clear that there is still a lot of heat under Hakone. The latest JMA alert is based on new earthquakes recorded at Hakone since April 26th along with deformation of the land's surface at the volcano. On Tuesday May 6 alone, over 115 earthquakes were recorded. Both of these are signs that magma may be moving under the volcano (although both could also be signs of changes in the hydrothermal system as well). These signs of unrest, at least right now, could be precursors to small, phreatic explosions similar to what happened at Ontake last year---and its this potential that has prompted a ban on hiking within the crater along with a 3-kilometer exclusion zone around the Owakudani Valley. An earthquake swarm at Hakone in 2001 didn't end up leading to any eruption, so this unrest may not lead to any activity. even if it does, the JMA thinks it will likely be small. However, whenever a volcano so close to a large city is rumbling, it us worth noting. This is the equivalent of unrest at Rainier near Seattle or Hood near Portland, where even a moderate explosive eruption could be very disruptive to those cities. A small eruption at Hakone might only impact those tourist destinations. Something larger could make Tokyo notice the volcanic threats that surround the city. You can try this webcam to see what might be going on at Hakone, along with the JMA webcam (火山カメラ画像) pointed at Hakone.