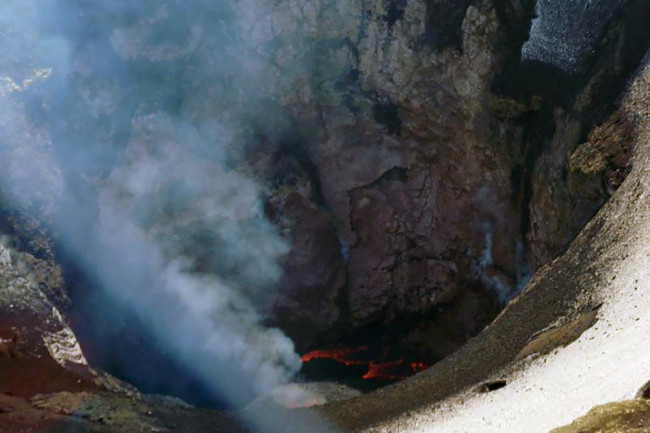 It has been over a year since a volcano in the United States was host to a lava lake. At the beginning of 2018, Hawaii’s Kīlauea was home to one at the summit and one on the East Rift Zone at Pu’u O’o. However, when the lower Puna eruption struck last May, both lava lakes drained. Well, the wait is over for a new lava lake, this time in Alaska.

The Alaska Volcano Observatory reported today that a helicopter flight over Shishaldin, in the Aleutian Islands, revealed a new lava lake at the summit of the volcano. The lava lake was spattering lava close to this new vent and the sighting of the new lava lake meant that the alert status at Shishaldin was raised to Orange/Warning. The volcano was experiencing a seismic swarm before this new lava lake was spotted.

This is the first eruptive activity at Shishaldin since 2015 and the volcano has produced some larger eruptions in 2004, 1999 and 1995 (to name a few). Thanks to its location, Shishaldin only has ~200 people living within 100 kilometers of the volcano, but plenty of trans-Pacific flights pass over every day, so its activity needs to be closely watched.

Shishaldin isn’t the only restless volcano in Alaska right now. Further west along the Aleutian Island chain lies Semisopochnoi. This remote volcano experienced a small ash explosion on July 18 and an earthquake swarm has been continuing. This restlessness means that AVO has the volcano at Orange/Warning alert status.

At the same time, Cleveland, also out along the Aleutians, is at Yellow/Advisory alert status thanks to elevated temperatures detected via satellite at the summit. No eruptions are happening, but the the heat detected suggests that magma might be close to the surface.

All this activity is pretty normal for the country’s longest volcanic chain!