After More Than 40 Years, Voyager 2 Has Gone Interstellar 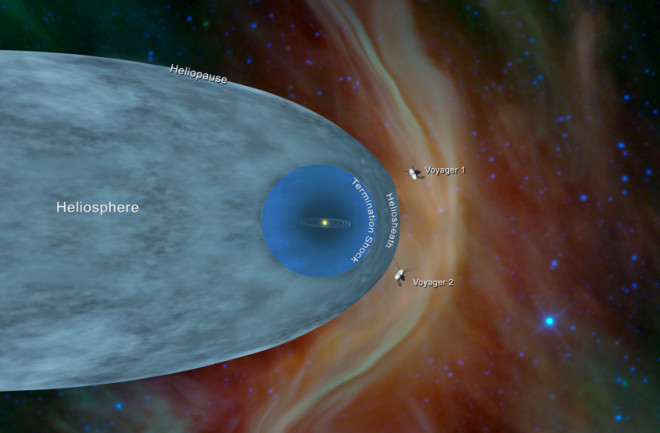 This illustration shows where NASA’s Voyager 1 and Voyager 2 probes are relative to one another. Both are outside of the heliosphere. (Credit: NASA/JPL-Caltech)

Humanity has another interstellar emissary.

After launching in 1977, NASA’s trailblazing spacecraft Voyager 2 has finally escaped the heliosphere, the Sun’s protective bubble of charged particles. It follows in the path of its sibling,  Voyager 1, which crossed into interstellar space in 2012.

The Sun’s solar wind makes up the heliosphere, which surrounds us and all of the planets in our solar system. The boundary where the hot solar winds of the heliosphere end and give way to the cold interstellar medium is known as the heliopause, and it’s also the border of interstellar space. On November 5, 2018, instruments aboard NASA’s Voyager 2 spacecraft sent back data indicating the craft had crossed the heliopause. The craft is now traveling and collecting data in interstellar space more than 11 billion miles from Earth.

At a news conference today at the meeting of the American Geophysical Union (AGU) in Washington, Ed Stone, project scientist for the unmanned Voyager missions since 1972, explained the three main components that led the team to come to this conclusion.

How You Know You’re Interstellar

Third, the team expected the craft to detect a sudden jump in magnetic field intensity as it crossed over out of the heliosphere, which it also saw.

Voyager 2 will continue to study the cosmos from the other side of the heliopause, as Voyager 1 has been doing. Suzanne Dodd, NASA Jet Propulsion Laboratory’s Director for the Interplanetary Network Directorate, estimated at the conference that the craft will continue to transmit data back to us for perhaps another decade.

“This is an extremely exciting time for the history of space exploration where we’re able to actually look at the galaxy through the clouded lens of our heliosphere and now take a step outside with Voyager and for the first time contemplate the vistas of our local galactic neighborhood,” NASA researcher and astrophysicist Georgia de Nolfo said at the conference.