A Weird, Orbital Dance Keeps These Moons of Neptune Safely On Track 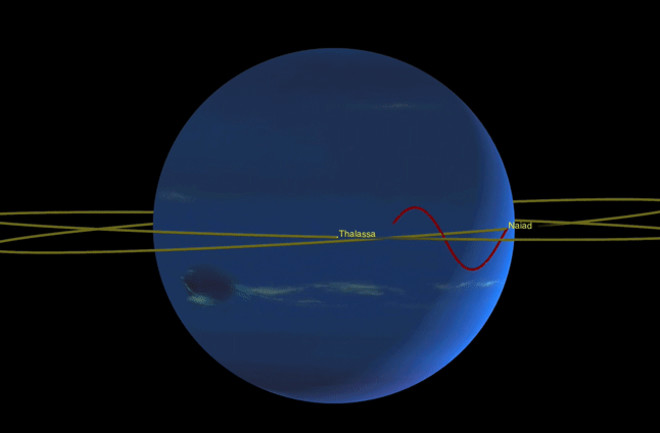 Bobbing up and down like a carousel horse might not sound like a stable way to orbit a planet, but it works for one little moon of Neptune. The planet's innermost known satellite, Naiad, has a tilted orbit and it moves up-and-down relative to its neighboring moon, Thalassa.

The strange arrangement keeps the two moons steadily on track, despite their close orbits, without getting thrown into Neptune or into space, according to a new study. The finding also helps reveal some of the history behind Neptune’s moons. The researchers reported the discovery in a recent paper in the journal Icarus.

This animation illustrates the wave pattern orbit of Neptune's moon Naiad's, which keeps it stable so close to the orbit of another moon, Thalassa. (Credit: NASA/JPL-Caltec)

Astronomers have found many examples of orbital resonances in the solar system. Pluto and Neptune are in a resonance in which Pluto orbits the sun twice for every three times that Neptune does. This resonance keeps the two objects’ orbits stable. Within the asteroid belt, there are gaps without asteroids where resonance patterns from Jupiter’s orbit disrupt the path of large groups of space rocks.

However, the newly discovered resonance of Naiad and Thalassa isn’t like anything scientists have seen in the solar system so far. Naiad and Thalassa are two small moons, each about 60 miles or so in size, with orbits nestled close together. Thalassa circles Neptune in about 7.5 hours, while Naiad laps it from the inside, taking just 7 hours per orbit.

But Naiad’s orbit is tilted by almost 5 degrees relative to Thalassa’s orbit and Neptune’s equator. This makes the little moon weave up and down in a wave motion that keeps it farther from Thalassa even as it passes by. Though it looks bizarre, the arrangement reinforces the moons’ orbits and keeps them stable despite being so near each other.

The crescent of Neptune and Triton, captured by Voyager 2 on August 25, 1989, as the spacecraft was fleeing from the planet toward interstellar space. (Credit: NASA-JPL)

And the researchers are already investigating how this orbital arrangement came to be. Scientists think that a group of Neptune’s moons — including these two — formed out of debris from a collision.

But moons formed from the same disk of debris should have orbits that are in the same plane, not tilted. That implies that an orbital resonance with some other moon must have bumped Naiad into this titled orbit, said Marina Brozović, a physicist at NASA’s Jet Propulsion Laboratory and one of the authors of the new study.

“You can read the history, the dynamical history, by just carefully looking at their orbits,” Brozović said. “And you can get to what they've been through in the past.”

Editor's Note: An earlier version of this story incorrectly characterized how astronomers think the orbits formed. An orbital resonance with another moon likely bumped Naiad onto its current course.