A tiny spacecraft nicknamed 'Wall-E' shot this pale-blue-dot shot of Earth from more than 600,000 miles away 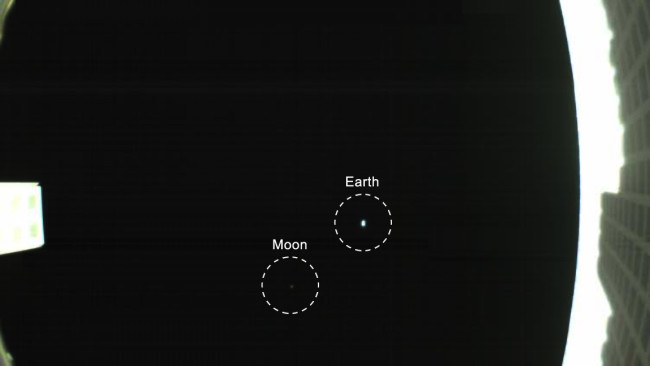 The first image captured by one of NASA's Mars Cube One (MarCO) CubeSats. The image, which shows both the CubeSat's unfolded high-gain antenna at right and the Earth and its moon in the center, was acquired by MarCO-B, nicknamed 'Wall-E', on May 9. (Source: NASA/JPL-Caltech) In 1990, the Voyager 1 spacecraft was cruising outward in the solar system, heading toward interstellar space. The late Carl Sagan, a member of the Voyager imaging team, had the idea of pointing the spacecraft back toward home for one last look. 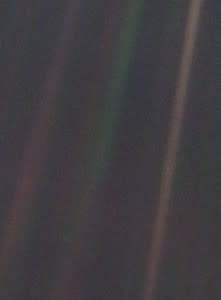 Voyager's Pale Blue Dot image. Can you spot Earth? (Source: NASA/JPL) The result was an image that Sagan made famous in his 1994 book "Pale Blue Dot" — an image showing Earth as a barely visible bluish dot. Now, we have another pale blue dot image, this one captured by a tiny CubeSat spacecraft, one of a pair that's shadowing NASA's InSight lander to Mars. The two briefcase-sized CubeSats, known collectively as Mars Cube One, or MarCO, will serve as a communications relay system when InSight attempts to land on the Red Planet, transmitting status information back to Earth. On May 9, the CubeSats were more than 600,000 miles from Earth. One of then, called MarCO-B — and affectionately known as "Wall-E" to the MarCO team — used a fisheye camera to snap its first photo. The image helped mission engineers confirm that the spacecraft's high-gain antenna had unfolded properly. You can see the antenna in the image at the top of this post — as well as a bonus: Earth, once again seen as a pale blue dot, and the Moon, seen as an even tinier speck. "Consider it our homage to Voyager," said Andy Klesh, MarCO's chief engineer at NASA's Jet Propulsion Laboratory, quoted in a NASA release. JPL built the CubeSats and leads the MarCO mission. "CubeSats have never gone this far into space before, so it's a big milestone. Both our CubeSats are healthy and functioning properly. We're looking forward to seeing them travel even farther." The InSight lander is scheduled to touch down on Mars on Nov. 26. It is designed to study the Red Planet's deep interior for the first time. The shadowing CubeSats are tasked with transmitting data on how InSight is doing as it makes the challenging descent to the surface through the thin atmosphere of Mars. NASA says the two tiny spacecraft are not essential to InSight's success. They are, instead, intended as a kind of proof-of-concept for future missions to Mars.