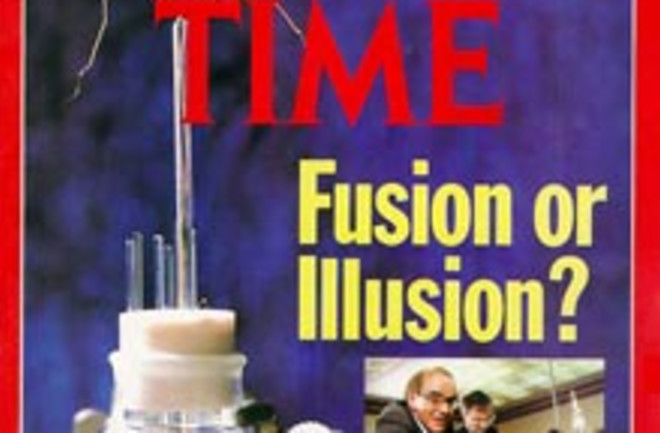 Cold fusion is the dream that won't die for some nuclear physicists. If they could replicate the nuclear reaction that powers our sun under room temperature conditions, the thinking goes, humanity would gain a clean source of nearly limitless energy. Work on cold fusion has been relegated to the margins of science since a much-hyped experiment 20 years ago was discredited, but now a new team of researchers says they've conducted experiments that should reinstate the field.

claimed to have created fusion reactions in a tabletop experiment, at room temperature. [Watch a video of the annoucement here.] Their claims of producing small amounts of excess heat — energy — in their experiments were at first met with excitement, then skepticism and finally derision as other scientists were unable to reproduce the results [Houston Chronicle].

Most physicists eventually concluded that the extra energy was either a fluke or the product of an experimental error. Mosier-Boss announced her team's new findings at a meeting of the American Chemical Society yesterday, twenty years to the day since the earlier declaration. She has also published the work in the journal Naturwissenschaft.

The theoretical underpinnings of cold fusion have yet to be adequately explained. The hypothesis is that when electrolysis is performed on [the heavy hydrogen isotope deuterium], molecules are fused into helium, releasing a high-energy neutron. While excess heat has been detected by researchers, no group had yet been able to detect the missing neutrons [EE Times].

found the "tracks" left behind by high-energy neutrons, which, they suggest, emerge from the fusion of a deuterium and tritium atom [New Scientist].

In their experiment, researchers exposed a special type of plastic to the reaction, and they say the excited neutrons carved three minute grooves in the material. However, the team didn't prove conclusively that the neutrons were the product of fusion, and other researchers say the subatomic particles could have been created in some other, unknown nuclear reaction. For now, the debate over cold fusion will continue. Related Content: 80beats: Another Small Step Towards Commercializing Nuclear Fusion 80beats: Nuclear Fusion Researcher Found Guilty of Scientific Misconduct DISCOVER: Can Engineers Achieve the Holy Grail of Energy: Infinite and Clean? DISCOVER: Radioactive Boy Scout profiles a teenager with a nuclear fusion hobby DISCOVER: Bush Gambles on Fusion EnergyImage: Time