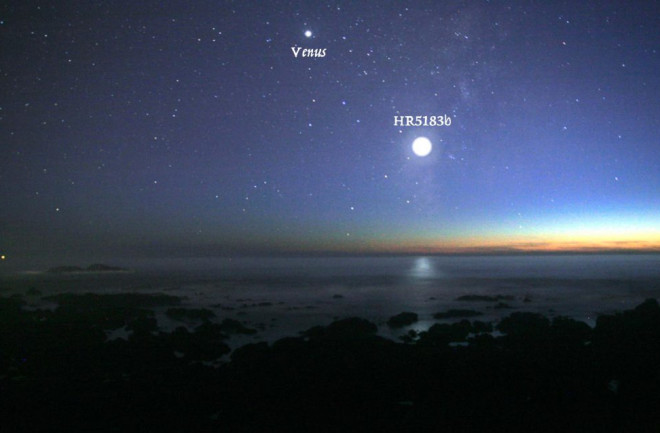 Over the past couple of decades, astronomers have discovered thousands of alien planets and solar systems. These worlds come in a wide variety of arrangements, many of which are quite different from what we see in our own solar system.

Some have giant planets that swing through the planetary systems in stretched-out, or “eccentric,” elliptical orbits, unlike the nearly circular orbits of planets like Jupiter and Saturn.

Astronomers think that many of these eccentric giant planets would act like “wrecking balls” in their planetary systems, disturbing the orbits of other, smaller planets. But that’s not always the case, according to a study published last week in The Astronomical Journal.

A giant exoplanet called HR 5183b, which orbits its host star in a stretched-out loop once every 75 years or so, wouldn’t disrupt the orbit of a small, rocky neighboring planet under the right conditions. And any stargazers on the hypothetical rocky planet’s surface would see the giant planet grow to be 15 times brighter than Venus in Earth’s sky when the giant planet swings by.

In August, a team of astronomers headed by Caltech’s Sarah Blunt announced that they’d discovered the HR 5183b, a giant planet with a stretched-out orbit. Other eccentric giant planets found so far typically had much shorter orbits that rammed through their planetary system’s habitable zones — regions where rocky planets could have liquid water on their surfaces — like wrecking balls.

When Stephen Kane, an astronomer at the University of California, Riverside, heard the news, he wondered whether HR 5183b would necessarily be a “wrecking ball” that destroyed other planets’ orbits. Since this giant planet had a farther-out orbit than others found so far, he wanted to see if a small, rocky planet could survive in this system’s habitable zone.

Kane teamed up with Blunt to run computer simulations of the scenario, with HR 5183b and a hypothetical rocky planet orbiting the system’s star. They found that for a narrow range of orbits within the planetary system’s habitable zone, a rocky planet could orbit the star without getting kicked out. This means astronomers don’t necessarily have to rule out planetary systems with eccentric giant planets as possible homes to life.

“This shows that you can have an even greater diversity of habitable conditions than we previously thought,” said Kane.

And when HR 5183b reaches its closest point to this hypothetical rocky planet about every 75 years, it would be 15 times brighter than Venus in Earth’s sky. Like Halley’s comet, which is clearly visible from Earth once every 75 years or so, Kane said, the sight would be a once-in-a-lifetime stargazing opportunity.