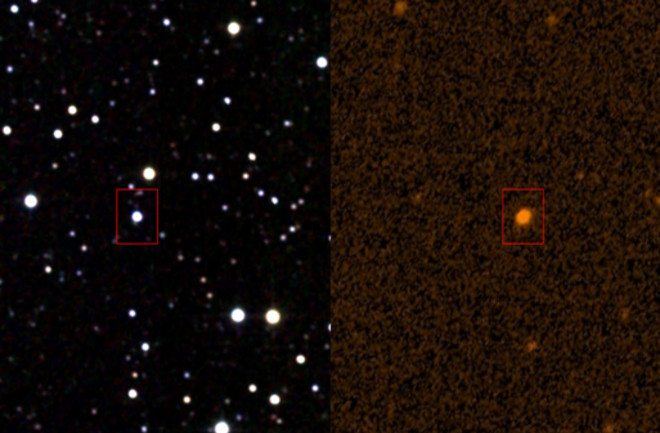 Infrared: IPAC/NASA Ultraviolet: STScI (NASA) There’s a star 1,300 light years away that has exhibited some of the strangest behavior ever seen: something dims 20 percent of its light, something that is beyond the size of a planet. It’s called KIC 8462852, but most people shorthand it Tabby’s Star, or Boyajian’s Star for its discoverer, Tabitha Boyajian. Here’s the thing, though. Absolutely nobody knows why it’s dimming that much. It could be a massive fleet of comets or the debris of a planet. But it’s not giving off much infrared excess, which is a sort of "heat glow" from reflected starlight. And now, it seems to be dimming again, either helping or complicating the search for a solution. Boyajian and co-investigator Jason Wright first put out the alert, hoping to garner observations from telescopes worldwide. They’re hoping at least one of telescope can grab spectra from the star to see what is causing the dimming.

So far the dimming is at 2-3 percent, meaning the transit of … something is just starting. Tabby’s Star has a dedicated telescope

waiting to find such an event, so the big observation period could yield further clues to what’s occurring. Ok, it’s time we tell you: some people think it’s aliens. The hypothesis, put forth by Wright, states that in the absence of a good hypothesis, all avenues must be explored, and that includes giant Dyson Swarm machines harnessing the power of the star. Gathering the spectra could help rule that out or bolster the case for that “all other avenues exhausted” scenario. Here’s the thing, too: you can get in on the action. Amateur astronomers use smaller scopes to track the star, which is bigger and older than the Sun. It’s at around 12th magnitude in the direction of Cygnus. So get out there tonight and hunt for some aliens.