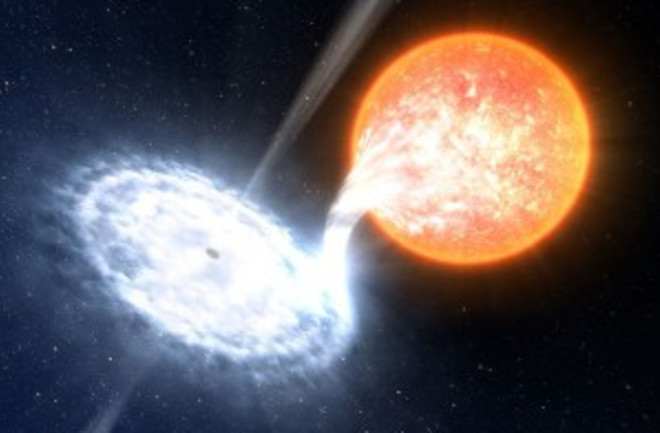 Black holes in binary systems can suck matter off their companion star, forming an accretion disk that shines brightly. Studying the light from this disk using simple techniques could allow astronomers to more easily find these black hole systems. (Credit: ESO/L. Calçada) Black holes are fascinating and cosmically important objects, but because light cannot escape them, they must instead be detected indirectly, such as through their gravitational effects. Discovering black holes this way can be challenging, but researchers at the Instituto de Astrofísica de Canarias (IAC) in the Canary Islands have just announced a new detection method that might allow astronomers to triple the number of known black holes with masses a few times that of the Sun. The new technique, outlined in a paper published September 20 in Monthly Notices of the Royal Astronomical Society, focuses in on stellar-mass black holes (those with masses of a few to several tens of solar masses) that reside in binary systems, in which a “donor” star sends mass flowing onto the black hole. This mass, composed of gas from the star’s atmosphere, forms into a glowing accretion disk swirling around the black hole as it falls past the event horizon, never to be seen again. Using a novel technique that looks for light coming from this accretion disk, the IAC astronomers suggest that characteristics of this light, which can hold key information about the mass and kinematics, or motion, of the gas, could reveal the strength of the gravitational field acting on the accretion disk, and therefore the mass of the object sucking it in.

Pinpointing the mass of the object responsible for vacuuming up its companion is important because it allows astronomers to differentiate between binary systems with black holes, which they’re looking for, and binary systems with neutron stars, which aren’t quite as massive as black holes, but can also suck matter off a companion in much the same way. Astronomers have identified about 60 candidate black hole-star systems of this type in our Milky Way, but only 17 of these have been confirmed to host black holes. The current difficulty in identifying the massive object comes from difficulties in charting the visible companion star’s motion around the unseen black hole or neutron star. Only by watching the star dance around its companion — which is extremely challenging, and not always possible in all cases — can astronomers determine the mass of the invisible object and tell whether it is a neutron star or black hole. The researchers say that their new technique, which uses a set of filters to measure light at the wavelength of hydrogen-alpha (which occurs at about 656 nanometers), could reveal black hole binaries that cannot be found in other ways, particularly those that are inactive (in which the black hole is not accreting a large amount of mass, and its disk is not shining as hotly or brightly). As proof of their technique, they observed four systems already known via other techniques to house black holes using a set of special hydrogen-alpha filters on the 4.2m William Herschel Telescope at the Roque de los Muchachos Observatory in La Palma. They compared their data with observations taken via other, more difficult methods that require more observing time and larger telescopes; both results agreed, correctly identifying the black hole in each system. This means the new technique could be used more quickly and efficiently — and with smaller telescopes, which are more prevalent and in lower demand among astronomers — to find new black holes in binary systems. The team estimates that if they observe some 1,000 square degrees near the galactic plane, their technique will find 50 new black hole systems, tripling the number of known objects to date. The technique could also be useful, they say, for finding different types of objects, including binary systems in which a neutron star or white dwarf is gobbling up material from a companion, or even ultra-compact binaries housing a black hole and a neutron star. Identifying these hard-to-find galactic populations could open up a wealth of information, giving astronomers a better idea of how massive stars live and die in our galaxy.