A New Planet in the Solar System? Not So Fast 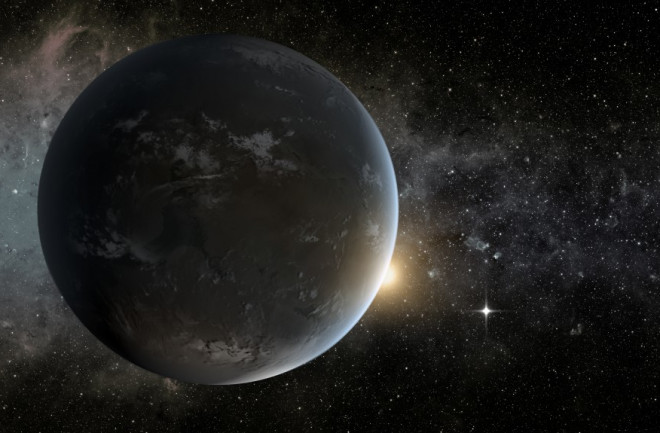 Researchers believe they may have spotted a super-Earth, like Kepler-62f (illustrated here), on the fringes of our solar system. (Credit: NASA Ames/JPL-Caltech/Tim Pyle) Astronomers working with the Atacama Large Millimeter/submillimeter Array (ALMA) have discovered what they claim could be another large planet on the fringes of our solar system. While examining the Alpha Centauri star system, the nearest to Earth, they noticed a fast-moving object crossing their field of view. Its speed and brightness allowed them to rule out another star as the culprit, and based on wavelength readings obtained from ALMA, they believe it could be a Trans-Neptunian Object (TNO) orbiting the sun somewhere between 10 billion and 2 trillion miles from our home star. For comparison, Pluto is less than 4 billion miles away from the sun. Although the finding is intriguing, the news has been met with a healthy dose of skepticism. A New Member of the Solar System? Stars typically emit too much light for astronomers to discern any objects in their immediate vicinity, but the ALMA observatory was built to capture low-frequency wavelengths, allowing researchers to see objects that are closer to stars. This is how researchers noticed a mysterious object moving relative to Alpha Centauri, exhibiting what scientists call “proper motion.” The researchers suggest the object could be one of several celestial bodies, including a brown dwarf, a super-Earth (a planet larger than Earth but smaller than Neptune), or a much smaller, icy body orbiting beyond Pluto.

A picture of Alpha Centauri captured by WISE. (Credit: NASA/WISE/Amy Mainzer) Researchers posted their findings online Thursday to arXiv, but they are still awaiting peer review. Hold Your Horses While the possibility of adding another large planet to our solar neighborhood is exciting, the likelihood that this object, if it exists, is a so-called “super- Earth,” is probably quite small. The ALMA observatory can only look at a tiny fraction of the sky at any given moment. For their study, the researchers could only observe, at maximum, one arcminute, or 1/21,600th, of the heavens. To put that in perspective, the moon is 30 arcminutes across when full and viewed from Earth. Therefore, the odds that researchers happened to catch a large planet in their narrow gaze are pretty small. As Caltech astronomer Mike Brown pointed out via Twitter: https://twitter.com/plutokiller/status/674804436150018048 https://twitter.com/plutokiller/status/674810165506379776 The far more likely possibility is that the astronomers captured one of the many icy objects floating beyond Pluto in the Kuiper Belt and the far-flung Oort Cloud. There are millions of such objects, ranging in size from less than a mile in diameter to almost 1,500 miles. And, as Bad Astronomy's Phil Plait pointed out, the WISE observatory performed a comprehensive scan of the sky last year, and found no large planets beyond Pluto. WISE senses infrared radiation, which makes warm objects appear bright, so the absence of any WISE data means that the most probable identity of this newfound object in our solar system is a small, cold body orbiting far beyond Pluto. While this doesn’t entirely discount the presence of a super-Earth, it makes the probability very small —too small, perhaps, for us to warrant getting our hopes up too high. For now, we'll just have to hold our breath and wait for these results to get vetted.