One of the important features of the universe around us is that, on sufficiently large scales, it looks pretty much the same in every direction -- "isotropy," in cosmology lingo. There is no preferred direction to space, in which the universe would look different than in the perpendicular directions. The most compelling evidence for large-scale isotropy comes from the Cosmic Microwave Background (CMB), the leftover radiation from the Big Bang. It's not perfectly isotropic, of course -- there are tiny fluctuations in temperature, which are pretty important; they arise from fluctuations in the density, which grow under the influence of gravity into the galaxies and clusters we see today. Here they are, as measured by the WMAP satellite. 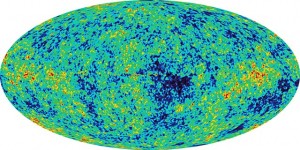 Nevertheless, there is a subtle way for the universe to break isotropy and have a preferred direction: if the tiny observed perturbations somehow have a different character in one direction than in others. The problem is, there are a lot of ways this could happen, and there is a huge amount of data involved with a map of the entire CMB sky. A tiny effect could be lurking there, and be hard to see; or we could see a hint of it, and it would be hard to be sure it wasn't just a statistical fluke. In fact, at least three such instances of apparent large-scale anisotropies have been claimed. One is the "axis of evil" -- if you look at only the temperature fluctuations on the very largest scales, they seem to be concentrated in a certain plane on the sky. Another is the giant cold spot (or "non-Gaussianity," if you want to sound like an expert) -- the Southern hemisphere seems to have a suspiciously coherent blob of slightly lower than average CMB temperature. And then there is the lopsided universe -- the total size of the fluctuations on one half of the sky seems to be slightly larger than on the other half. All of these purported anomalies in the data, while interesting, are very far from being definitive. Although most people seem to agree that they are features of the data from WMAP, it's hard to tell whether they are all just statistical flukes, or subtle imperfections in the satellite itself, or contamination by foregrounds (like our own galaxy), or real features of the universe. Now we seem to have another such anomaly, in which the temperature fluctuations in the CMB aren't distributed perfectly isotropically across the sky. It comes by way of a new paper by Nicolaas Groeneboom and Hans Kristian Eriksen:

Sexy title, eh? Here is the upshot: Groeneboom and Eriksen looked for what experts would call a "quadrupole pattern of statistical anisotropy." Similar to the lopsided universe effect, where the fluctuations seem to be larger on one side of the sky than the other, this is an "elongated universe" effect -- fluctuations are larger along one axis (in both directions) as compared to the perpendicular plane. Here is a representation of the kind of effect we are talking about -- not easy to make out, but the fluctuations are supposed to be a bit stronger near the red dots than in the strip in between them. 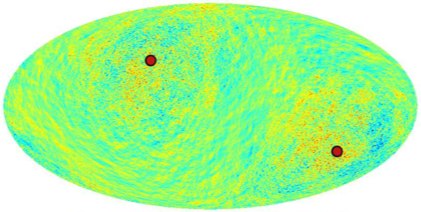 It's not a very large signal -- "3.8 sigma," in the jargon of the trade, where 3 sigma basically means "begin to take seriously," but you might want to get as high as 5 sigma before you say "there definitely seems to be something there." However, the WMAP data come in different frequencies (V-band and W-band), and the effect seems to be there in both bands. Furthermore, you can look for the effect separately at large angular scales and at small angular scales, and you find it in both cases (with somewhat lower statistical significance, as you might expect). So it's far from being a gold-plated discovery, but it doesn't seem to be a complete fluke, either. Remember, looking for any specific effect is quite a project -- there is a lot of data, and the analysis involves manipulating huge matrices, and you have to worry about foregrounds and instrumental effects. So why were these nice folks looking for a power asymmetry along a preferred axis in the sky? Well, you might recall my paper with Lotty Ackerman and Mark Wise, described in the "Anatomy of a Paper" series of blog posts (I, II, III). We were interested in whether the (hypothetical) period of inflation in the early universe might have been anisotropic -- expanding just a bit faster in one direction than in the others -- and if so, how it would show up in the CMB. What we found was that the natural expectation was a power asymmetry along the preferred axis, and gave a bunch of formulas by which observers could actually look for the effect. That is what Nicolaas and Hans Kristian did, with every expectation that they would establish an upper limit on the size of our predicted effect, which we had labelled g*. But instead, they found it! The data are saying that

So naturally, Lotty and Mark and I are brushing up on our Swedish in preparation for our upcoming invitations to Stockholm. Okay, not quite. In fact, it's useful to be very clear about this, given the lessons that were (one hopes) learned in John's series of posts about Higgs hunting. Namely: small, provocative "signals" such as this happen all the time. It would be completely irresponsible just to take every one of them at face value as telling you something profound about the universe. And the more surprising the result -- and this one would be pretty darned surprising -- the more skeptical and cautious we have every right to be. So what are we supposed to think? Certainly not that these guys are just jokers that don't know how to analyze CMB data; the truth couldn't be more different. But analyzing data like this is really hard, and other groups will doubtless jump in and do their own analyses, as it should be. It's certainly possible that there is a small systematic effect in WMAP -- "correlated noise" -- rather than in the universe. The authors have considered this, of course, and it doesn't seem to fit the finding very comfortably, but it's a possibility. The very good news is that the kind of correlated noise one would expect from WMAP (given the pattern it used to scan across the sky) is completely different from that the we would worry about from the upcoming Planck mission, scheduled to launch next year. Or, of course, we could be learning something deep about the universe. Maybe even that inflation was anisotropic, as Lotty and Mark and I contemplated. Or, perhaps more plausibly, there is some single real effect in the universe that is conspiring to give us all of the tantalizing hints contained in the various anomalies listed above. We don't know yet. That's what makes it fun.