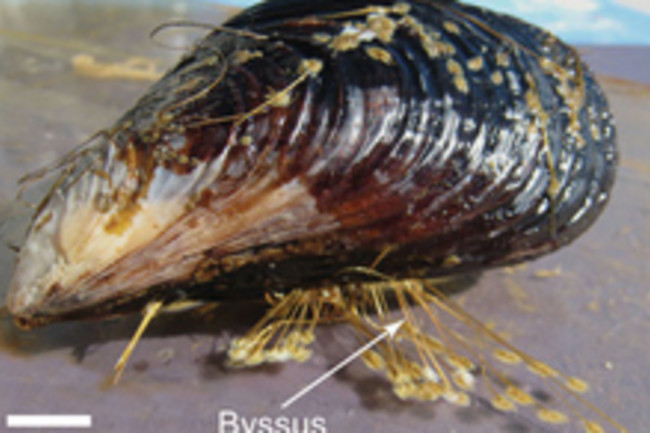 It's not easy to find a material that's both stretchy and hard. Neither is it to find a glue that will stick underwater. But this week researchers said that the solutions aquatic animals have created for those problems could inspire new materials in the lab. Mussles have solved the hard-but-still-stretchy problem with their "beards." The beards are actually made of 50 to 100 so-called byssal threads, and they are what anchor a mussel to a rock or other stable structure. According to study author Matthew Harrington,

"they're not only facing these huge wave forces which are trying to, you know, rip them off the rocks, but also they're being blasted with debris like small pieces of sand and other debris in the water that are basically acting like sandblasting" [NPR]

. If the mussels are blasted off the rocks, they'd likely be eaten or killed. To avoid that fate, the mussels developed those byssal threads with dual layers.

About 95 percent of the inner layer of these fibers is composed of a smooth, stretchy material, while the outer layer is made up of collagen laced with iron. No other known material on Earth exhibits this kind of soft and stretchy inside, and hard, flexible and protective outside [Discovery News]

. Looking at the structure and chemical composition through a microscope, Harrington says that threads look like sandpaper, with the harder "granules" coating a softer surface. While the researchers are far off from developing a synthetic version of the material, the byssal threads could eventually inspire new types of body armor for soldiers and police.

Safer, longer-lasting medical implants could also result, since new materials developed from the mussels' fibers could help to anchor such devices in the human body [Discovery News].

The research team documents its work in Science. Also this week, scientists from Utah looked at a species of caddisfly called

Brachycentrus echo; its larva depends on its ability to weave sticky silk underwater to create structures for protection and storing food. Studying the silk in depth, bioengineer

Russell Stewart found that it was made of fibroin protein and phosphates, which people already use as an adhesive in products like dentures. Stewart hopes that stealing the caddisfly's secrets could lead to products like a bandage that doctors could use on wet surfaces during surgery. He says,

"Gluing things together underwater is not easy. Have you ever tried to put a Band-Aid on in the shower? This insect has been doing this for 150 million to 200 million years"[Salt Lake Tribune]