A Massive Star Completely Destroyed by a Supernova is Puzzling Scientists 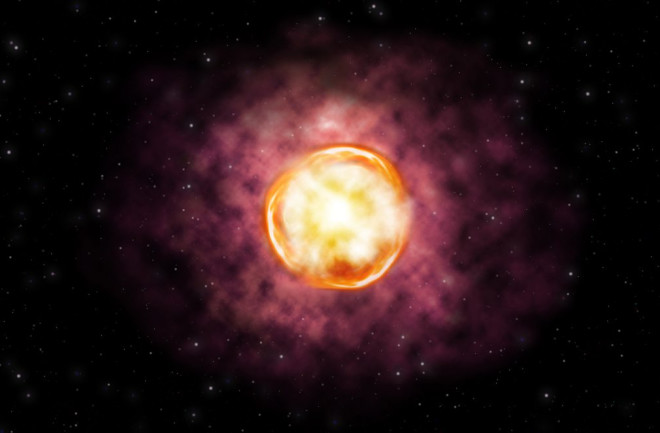 Supernova 2016iet is an example of one of the most extreme types of stellar explosions, though it has some odd features. (Credit: Gemini Observatory/NSF/AURA/illustration by Joy Pollard)

In November of 2016, the sharp-eyed Gaia spacecraft spied a supernova that exploded some billion light-years from Earth. Astronomers followed up with more telescopes, and quickly realized that this supernova – dubbed SN2016iet – was an odd one in many ways.

For one, the star that caused the supernova seemed to orbit far in the hinterlands of its tiny, previously unknown dwarf galaxy, some 54,000 light-years from its center. Most massive stars are born in denser clusters of stars, and it’s a puzzle how this one came to form so far out.

And this star was extremely massive, starting life as some 200 times the mass of the sun, near the upper limit of what scientists think is possible for a single star to weigh.

The supernova itself also left what appeared to be the signature of two explosions, separated by about 100 days. Astronomers think this isn’t actually due to multiple explosions, but from the explosion hitting different layers of material the star lost in the years leading up to its death and left scattered around it in a diffuse cloud.

The star meets many of the criteria for something called a pair instability supernova, a kind of explosion that some extremely massive stars should theoretically undergo. Such an event leaves the star completely destroyed, leaving nothing behind. But finding examples of these rare stellar explosions has been difficult, and this is still one of the first scientists have discovered. And even in that rare company, SN2016iet remains an oddball find.

Researchers led by graduate student Sebastian Gomez from the Harvard Center for Astrophysics published their results August 15 in The Astrophysical Journal.

The same patch of sky is shown in 2014, before the supernova exploded, and in 2018, highlighting just how far outside the galaxy the explosion occurred. (Credit: Center for Astrophysics)

SN2016iet gave off a tremendous amount of energy when it exploded, and has been taking a long time to fade away. That and other details led astronomers to think this is a rare example of a pair-instability supernova. Usually when massive stars explode, they leave something behind – either a dense core called a neutron star or a black hole.

But sometimes, scientists’ theories predict that massive and low-metallicity stars (those with few elements other than hydrogen and helium) can begin making pairs of matter and antimatter in their last days. This causes a runaway effect where the pressure drops in the star’s core, causing a collapse, leading to an enormous explosion that completely destroys the star, leaving nothing behind, not even a black hole.

A star must be 130-260 times the mass of the sun to die in such a manner. And such a massive star will burn through its fuel quickly, living for only a few million years.

Its enormous size is part of what makes SN2016iet’s isolated location so puzzling. Usually massive stars are born in dense clusters, not far off on their own. And since SN2016iet’s star would have lived such a short life, it should have nearby sibling stars that outlived it. It’s possible the star was kicked out of its original home, but again its short life span limits how far it could have traveled. To actually get so far from its apparent host galaxy, it would have to have been kicked out at a speed far surpassing anything scientists have yet measured.

The most plausible explanation is that the star formed just where astronomers see it, and that in fact it’s part of a satellite galaxy or cluster that’s simply too dim to see.

A star headed for such a cataclysm is also expected to shed mass over the thousands of years before its death, throwing off material through dense solar winds. But longer-term observations of the star resulted in a double peak of brightness that Gomez says is from the supernova’s light producing shocks as it hit different layers of material. And that material is still quite thick and close to the star, implying that it instead shed all that mass in less than 20 years, instead of thousands. Gomez says that’s another part of the puzzle.

SN2016iet is one of the best examples of a real-life pair instability supernova, and it also challenges many of the details about how these stars actually look when they explode. Gomez and his team have already been approved for a slot on the Hubble Space Telescope. They’ll use their time to perform more follow-up observations, and also look for the satellite galaxy or cluster they suspect housed the supernova’s progenitor star. Gomez says the observations should be taken within the next six months or so, hopefully answering more questions about this strange star.