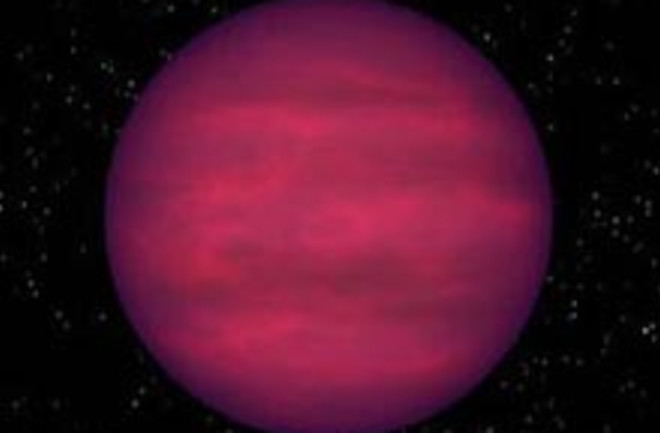 Astronomers have discovered the closest new star to us that's been spotted in 63 years. Though "star" might be a stretch, depending upon whom you ask. The new find, UGPS 0722-05, is less than 10 light years from here. But sky-watchers missed it for so long because it's a brown dwarf, a member of the murky class of celestial objects that linger between gas giant planets and low-mass stars.

Brown dwarfs have so little mass that they never get hot enough to sustain the nuclear fusion reactions that power stars like the sun. Still, they do shine, because they glow from the heat of their formation, then cool and fade [New Scientist]

. This dwarf's temperature is somewhere between 266 and 446 degrees Fahrenheit, making it the coldest scientists have even seen. With its minimal activity, the brown dwarf gives off just 0.000026 percent the amount of light that our sun does. Like dwarf planets, which cast aside the 9-planet solar system of our childhoods and riled Pluto-philes everywhere, brown dwarfs don't lend themselves to simple scientific definitions.

The International Astronomical Union sets the planet–brown dwarf boundary at 13 times the mass of Jupiter. But that mass limit is an imperfect definition—what of brown dwarf–size bodies that orbit stars, behaving themselves like supersized planets [Scientific American]

? The nomenclature could get even messier when the details of this new find are confirmed. Study leader Philip

Lucas and his colleagues suggest that the newly discovered brown dwarf is so cool that it might be the first member of a new class of ultralow temperature dwarfs. Although one fingerprint of such a new class, absorption of infrared light by ammonia, appears to be missing, only “time will tell” if the discovery merits a new classification, the researchers note [Science News]

. Lucas' team's paper is currently being submitted to the journal Nature, where the peer-review process should help to verify how close the team was with its parallax measurement of the brown dwarf's distance. If they're correct, UGPS 0722-05 will not only beat out the previous record-holders for proximity to Earth—a binary set of brown dwarfs in the Epsilon Indi system, about 11.8 light-years away—it would also suggest that perhaps more of these shadowy celestial objects linger even closer to us. Related Content: DISCOVER: Hi Ho, Hi Ho—Brown dwarfs are the missing links between stars and planets DISCOVER: Works in Progress—When it's a planet that's not a planet Bad Astronomy: Brown Dwarf T Party Bad Astronomy: The Upper Limit to a Planet