A golden age of sibling comparisons 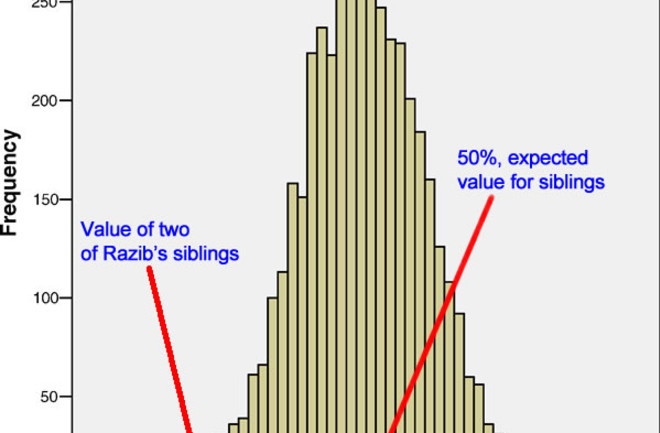 I really love the paper Assumption-Free Estimation of Heritability from Genome-Wide Identity-by-Descent Sharing between Full Siblings. I first read it about six years ago. The result is rather straightforward, but the problem is empirically a moderately deep one. Modern analytic genetics as the fusion between Mendelism and biometrics began with R. A. Fisher's The Correlation between Relatives on the Supposition of Mendelian Inheritance in 1918. But note, that paper assumed particular relatedness between relatives. As highlighted in the above paper the expected values for most categories of relatedness always had a variance component which was unaccounted for, and so reduced the power of the methodology to ascertain the extent of heritability. The relatedness you can expect between any two siblings is ~0.50, and that is also the average across all siblings. But the reality is that in most cases two given siblings will not share half their genes identical by descent.

Before the genomic era the precise assessment of relatedness in a given case was laborious, if at all feasible. But not so today. Because modern genomics is anthropocentric we can focus first on humans. Because I've had my whole family genotyped I know the relatedness between pairs where you have an expected value which is not likely a realized value (siblings, uncles &amp; aunts to nieces and nephews, and grandparents to grandchildren). So, I know that my daughter has a relatedness of 0.22 to my mother and 0.28 to my father, and not 0.25. I also know that my relatedness to my siblings is 0.52, 0.51, and 0.48. Or that two of my siblings are 0.41 related!

Why does this matter? When it comes to the cliché "nature vs. nurture" argument siblings are powerful and clear evidence. On the one hand you have the people who make maximal claims for the environment controlling variation within the population. And on the other hand you have the other element which didn't see a gene-trait correlation which it didn't like. Siblings comparisons are powerful because the design here is not opaque or abstruse, but totally transparent. Siblings share the same home environment.* If they are near in age they also share similar socioeconomic parameters. And yet they vary. Why? In a large cohort of siblings you obtain a range of genetic variation as in the figure above. A simple test of whether genetic components are powerful would be to examine the patterns across siblings. In other words, are siblings who differ in final trait values those siblings who tend to differ in genetic relatedness?

This would also get at some correlations which people observe on the population scale. For example, are taller people more intelligent than shorter people because of correlations between the genes for height and intelligence? This observation has been offered up on the comments of this weblog by uncritical people innumerable times. But a simple answer is at hand for the curious: the correlation does not persist across siblings, who vary a great deal in height (a highly heritable trait) and intelligence, but not in a correlated fashion. Instead of constantly looking at population scale correlations, which are subject to specious and legitimate critiques, we could instead look at patterns which occur within families. This will not silence all skeptics, nor should it. But it will be a big step forward in making the "nature vs. nurture" question more tractable for the general public.

Finally, how are we going to do this? Much of this will no doubt occur in the academy or through organized institutions. But there is absolutely no reason that the general public couldn't "crowd source" this sort of project. openSNP already exists, and many scientific genetics obsessives like me have already genotyped our whole families. In the near future a critical mass will exist to explore a whole range of questions, just by looking at the incredible genetic variation within families.

* The proliferation of half-siblings and foster-parenthood in the lower middle to lower class segments of the United States is a potentially vast "natural experiment" for a future behavior genomicist.