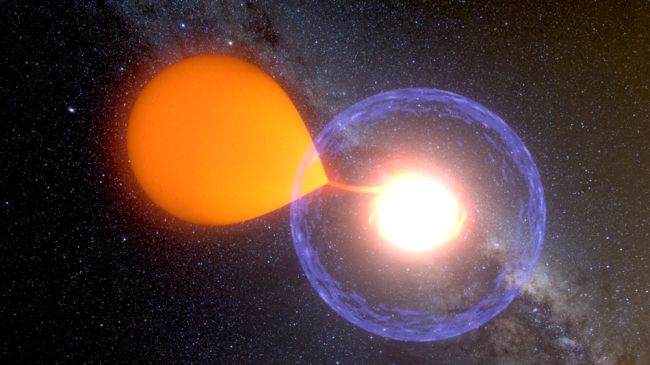 White dwarf-companion star binaries can have explosive relationships. They begin with a hibernation phase, where the companion sends a whisper of mass to the white dwarf as a stream of hydrogen. The white dwarf cyclically brightens and dims and then awakes, erupting in a nova, a stellar nuclear explosion on its surface causing the white dwarf to get far brighter, and the companion sends even more mass over. The process slows and eventually starts all over again. A team of Polish scientists watched this behavior in a nova called V1213 Cen using data from 2003 to 2016 in the OGLE (Optical Gravitational Lensing Experiment) sky survey run by the University of Warsaw. This is the first time scientists have measured the changes in the rate that the companion sends mass to the white dwarf before, during and after a nova, Przemek Mróz from Warsaw University who analyzed and interpreted the data, noted in the paper released today in the journal Nature.

If you’re interested in spotting classical novae yourself, Mróz’s team spots several per year and announces them on The Astronomer’s Telegram.

Michael Shara, Curator of the Department of Astrophysics for the American Museum of Natural History in New York City and his colleagues first proposed the hibernation and nova scenario around thirty years ago. Here, the hibernating dwarf nova phase of periodic flickering and the classical nova phase of extreme brightness are just different stages of the same thing. He was impressed to see Mroz’ observations as evidence of the proposition. “We're looking very much at a scenario of eggs to caterpillars to butterflies and back to eggs,” he said. “[Mróz’s analysis] was a clear demonstration that you can have these transformations from one type of system to another” Shara pointed out that another next important step would be to observe one of these so-called cataclysmic variable systems go into deep hibernation, where the companion star stopped sending mass to the white dwarf completely. "Mróz gave extra credit to the OGLE survey for his work. “This is another case when OGLE data are crucial for studying unique, extremely rare phenomena”