A Caldera in the Making?: The Curious Story of Laguna del Maule 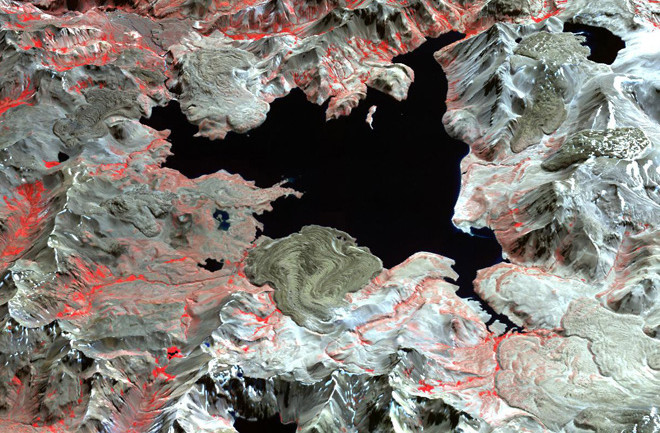 False color ASTER image of Laguna del Maule (vegetation is in red) on April 9, 2003, showing some of the rhyolite lava flows and domes around the lake. Image: NASA Earth Observatory. The Geological Society of America Annual Meeting is always chock full of fascinating science and this year's meeting was no exception. However, if one talk really caught my attention, it was one presented by Brad Singer on Laguna del Maule. I've mentioned the restless volcano before in this space, but after hearing his description of just what is going on down there in Chile, it really has me thinking about how we can look for the candidates for the next massive eruption on the planet. Laguna del Maule is a complex of Holocene rhyolite-rhyodacite domes and ash deposits that center around a lake that straddles the Chilean-Argentine border. No less than 24 vents have produced at least 36 rhyolite and rhyodacite lava flow and domes (see above) over the last 20,000 years. Most of these have been mapped and dated by Singer's group and by one of the great volcanologists/petrologists of our time, Wes Hildreth (USGS), who has spent 15 field seasons picking apart Laguna del Maule. Now, Hildreth's name should be familiar as he is the world's expert on magmatism in the Long Valley area of California -- and his work at Laguna del Maule is no coincidence (I'll get to that soon). None of these lava flows and domes are especially large, usually only erupting 1 cubic kilometer or less, with the largest postglacial rhyolite being the Cerro Barrancas flows that topped out at ~1.87 cubic kilometers. For comparison, most of these eruptions were no larger than what has erupted from the Mono/Inyo dome chain in California. Laguna del Maule has had somewhat of a personality change over the last 100,000 years. If you look up the volcano in the Global Volcanism Program's database, it is listed as "andesite/basaltic andesite" and this is no mistake. During the Pleistocene, the volcanic complex produced numerous basaltic lava flows and cinder cones along with a number of small stratovolcanoes that encircle the current lake (see below). Sometime around 20,000 years ago, the volcanic system began to erupting increasing silicic material until today, when it is almost exclusively rhyolite. Along with this compositional change, a change in the location of the eruptions followed. Most of the older Pleistocene eruptions came from vents outside the depression that forms the modern lake. However, the rhyolite and rhyodacite domes of the Holocene almost exclusively come from within the depression, and mainly from its western margin. The recent activity at Laguna del Maule suggest that something has dramatically changed within the magmatic system and Singer suggests that the whole magmatic system may have been replenished with basalt since the end of the last glacial period (~10,000 years).

Part of the ~760 ka Bishop Tuff, erupted from the Long Valley caldera after numerous rhyolite lava flows and domes leaked from the growing reservoir of magma. Image: Erik Klemetti In his talk, Singer pointed out one thing I hadn't noticed before about Laguna del Maule: it's remarkable similarity in size and character to the Long Valley caldera. As I mentioned above, it probably isn't a coincidence that Hildreth would want to study Laguna del Maule because, in terms of the the footprint of the two systems and the types of lava flows that have erupted during different parts of their history, the two volcano systems are eerily similar. Prior to the caldera-forming eruption at Long Valley that deposited the enormous Bishop Tuff (see above), the area that is now the caldera was erupting rhyolite lava flows and domes, including features that survive the caldera-forming event like Glass Mountain. This is a pattern we see a many of these large calderas -- leaky, pre-caldera lava flows that tap the growing reservoir of magma (see also: Crater Lake). There is a lot of strain put on the crust as the magma body grows, so small cracks can likely lead to small lava flows. Compare that with the modern Laguna del Maule, where a few dozen small rhyolite lava flows have erupted in the past 20,000 years, you can begin to see why we want to watch it carefully. That's not all because merely a preponderance of rhyolite lava flows does not caldera make. Singer presented a list of active rumblings at Laguna del Maule that have been at work for over a century. In their field work, they found lake sediments that have been uplifted over 30 meters from the lake bottom, likely in less than a century. Modern monitoring of the ground surface via GPS and surveying has found that in the past decade, there has been 24-28 centimeters of uplift per year over the last 6 years. Compare that with the current "enhanced" uplift at parts of Yellowstone of that is measured in a few centimeters per year and you can see that Laguna del Maule is in the middle of quite a period of activity. However, that's not all! Singer said that recent surveys using magnetotelluric methods that can detect areas of liquid (e.g., magma) in the crust have found that under the western side of the lake, where the uplift is highest as is seismicity, there might be at least 100 cubic kilometers of rhyolite magma at a depth of ~5-15 kilometers. Looking at the seismic data, it is likely that much of the magma is closer to 5 kilometers depth. Be forewarned, these types of geophysical surveys tend not to produce unique solutions as some of the liquid it detects could be a vigorous hydrothermal system. However, Singer reminded us that even if some of it is a hydrothermal system, something hot needs to be driving it, so he thinks that 100 cubic kilometers of rhyolite is a low end estimate of the total volume.

A view across Laguna del Maule, with the recent domes and older stratocones visible. Image: Roberto Herrera Pellizzari / Flickr. Now that should get everyone's attention. Even if we assume that, on average, between 10-30% of the magma erupts while the rest is left behind, that would be an eruption of 10-30 cubic kilometers, which would be a VEI 6 eruption (akin to Krakatau or Pinatubo, if not larger). This is not to say that we should expect such a giant eruption as one of the big questions that came out of GSA for me is how much of a magmatic system is actually eruptible at any given time. Research by Kari Cooper and Adam Kent suggest that eruptible magma might only be present from a very small fraction of the lifespan of a volcano and represent only a small portion of the whole magmatic system (the rest being crystal mush that is too rigid to erupt). However, contrast that idea with studies by Guilherme Gualda on the ~600 cubic kilometer Bishop Tuff suggest it could have accumulated in a matter of centuries. Given Singer's estimate that 100 cubic kilometers might be a lower estimate, we can seriously consider that there might be a significant volume of magma residing under Laguna del Maule. If an eruption of this size were to occur at Laguna del Maule, it would likely create a new caldera on the western side of the lake (at that point, a former lake). Oddly enough, Singer said there is little evidence of surface degassing at Laguna del Maule. Abundant fumaroles and hot springs might be expected in an area with shallow magma under the surface (think about Norris Basin at Yellowstone). The one place degassing could be hiding is the bottom of Laguna del Maule and Singer mentioned that surveys of the lake found high concentrations of carbon dioxide. However, that is all we know about the degassing of the Laguna del Maule magma body. So, where does that leave us? Right now, Laguna del Maule shows all the signs of a restless volcano -- and even more telltale signs that we could be seeing the precursors to a massive eruption. The Chilean Geologic Survey (SERNAGEOMIN) has Laguna del Maule on a green alert status after a waning of the seismicity at the volcano due to these signs of magmatic activity under the surface, but only 6 months ago the alert was at Yellow. They realize that although Laguna del Maile may not have erupted in possibly more than 1,000 years, it is a very real threat. We have yet to be able to monitor a volcano closely before it produced such a cataclysmic event, so we aren't sure exactly what the full range of events before such an event might be. We especially don't know what the timescale before an eruption might be -- it could happen in 2 years or 2,000 years. Over the past 20,000 years, Laguna del Maule has been giving us samples of what lurks beneath in these rhyolite flows and domes. That might not be all. What we know about Laguna del Maule is that it houses a large volume of rhyolite magma not too far under the surface, so the real question is trying to understand what is the real chances of a massive eruption. That is what Singer and his collaborators hope to do with their continued research at this restless Chilean volcano.