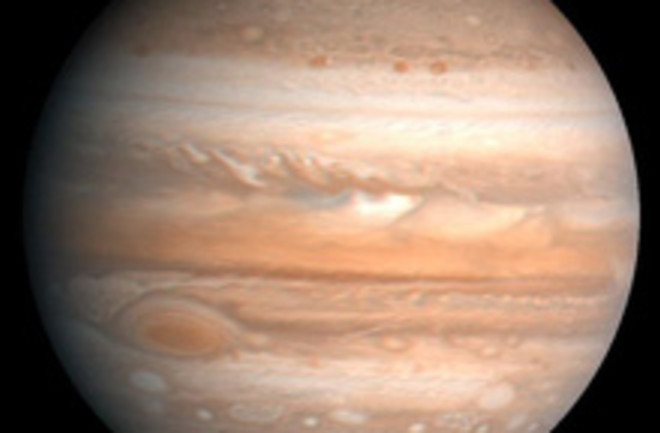 Jupiter is the largest planet in our solar system. (Credit: NASA)

We silly humans tend to think of rain just in our own terms, the falling water tainted with various toxins that draws out our umbrellas and cancels our baseball games. But across the solar system, it rains on other worlds with thick atmospheres–it's just not rain we would recognize. On Saturn's moon Titan, for instance, it rains methane. And now, a group of scientists says in Physical Review Letters, computer simulations have confirmed that it rains helium on Jupiter. The term "rain" applies loosely here, because the hellfire precipitation happening on Jupiter isn't much like a pleasant afternoon shower here on Earth. Droplets of helium form thousands of miles below the tops of hydrogen clouds, at temperatures around 9,000 degrees Fahrenheit--the helium stays in fluid form because of the planet's high atmospheric pressure.

Pressures and temperatures on Jupiter are so high that the droplets of liquid helium are falling through a fluid of metallic hydrogen [Space.com]

. Curiously, the key to figuring out Jupiter's helium rain was the mystery surrounding the element neon. Since neon is a noble gas that doesn't react much with other elements, researchers expected to see concentrations of it in the gas giant planet's atmosphere.

But the Galileo probe that plunged into Jupiter's upper atmosphere Dec. 7, 1995, found only about one-ninth the amount of neon that should have been there. There was also less helium than expected, even though helium and hydrogen are the two main constituents of the planet [Los Angeles Times]

. Hugh Wilson and colleagues had suspected that the answer to this puzzle might be helium rain falling out of the atmosphere to the lower depths of the planet, carrying neon with it. And, they say, their simulation of the mixing of gases inside our solar system's largest planet showed a layer of helium would be formed that would cause this "rain" effect.

That explains the dearth of helium and neon.

Unlike rain, fog and other weather systems on Earth, helium droplets on Jupiter don't cycle through the atmosphere, but instead are being deposited deep into the planet [Discovery News]

. The scientists say the effect might not be limited to Jupiter, either. Because Saturn is smaller and colder than Jupiter, the physics suggest that helium rain could be even more widespread there. However, despite Cassini's continued surveillance of the planet, no probe has dived into Saturn's atmosphere to take the kind of measurements Galileo took of Jupiter. Train was wrong, then. Rather than "Drops of Jupiter," the band should have written "Drops on Jupiter." Related Content: DISCOVER: Spotted: Methane Rain on Titan 80beats: Jupiter's Great Red Spot Reveals Its Stormy Secrets 80beats: Cassini Sends Back Ravishing New Photos of Saturn's Rings 80beats: 400 Years After Galileo Spotted Them, the Moons of Jupiter Are Looking Fly (slide show) 80beats: Mysterious Smash on Jupiter Leaves an Earth-Sized ScarImage: NASA; Hugh F. Wilson and Burkhard Militzer, University of California, Berkeley