Dark matter—the unseen stuff that makes up more than four-fifths of the matter in the universe—is finally coming into view.  What we see may change our entire picture of reality. 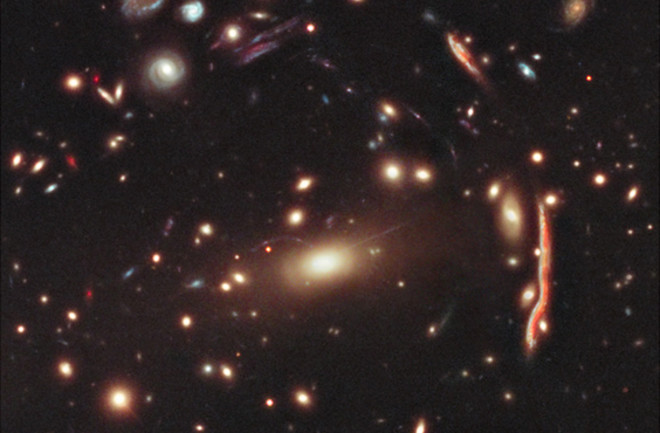 More than 80 percent of the matter in the universe consists of an unknown substance that cannot be seen through any telescope nor detected in any lab. This invisible stuff interacts with normal matter only through gravity, which is how astronomers first inferred its existence. More recently, computer models have demonstrated that dark matter is actually crucial to the visible realm. Without it, galaxies never would have pulled together. There would be no stars. There would be no people.

Although astronomers still do not know exactly what dark matter is, in 2012 they learned a lot more about how it works. One team traced the way it spreads its tentacles throughout the cosmos. And another found hints that dark matter may not always be invisible after all.

Last January, Ludovic van Waerbeke of the University of British Columbia and Catherine Heymans of the University of Edinburgh announced that they had mapped a web of dark matter more than 1 billion light-years across. "That's the largest map ever made of dark matter," Van Waerbeke says. Although the dark stuff cannot be observed directly, its gravity bends light from any galaxies shining through it. Measuring the amount of bending reveals how much dark matter is present.

Van Waerbeke and Heymans collected data for more than five years using the Canada-France-Hawaii Telescope atop Mauna Kea in Hawaii. They then analyzed light from 10 million galaxies, noting exactly where concentrations of dark matter distorted the galaxies' appearance. The resulting map shows gigantic clumps and strands of dark matter separated by enormous voids, with all the visible galaxies in the universe embedded in the dark web. The structure closely resembles what computer models predicted, but Van Waerbeke notes that the new map covers less than 0.4 percent of the sky. "It doesn't mean we won't find anything weird when we go to much larger coverage," he says.

Last summer, two astrophysicists from the University of California, Irvine, took another step toward making sense of the dark universe. They detected a stream of gamma rays from the center of our galaxy, the Milky Way, and suggested the radiation might be linked to dark matter. According to some theories, dark matter consists of particles called WIMPs (weakly interacting massive particles) that could destroy each other on contact. If so, whenever dark particles collide, they would release a burst of high-energy radiation.

Kevork Abazajian and Manoj Kaplinghat found the gamma-ray signal in data collected by NASA’s Fermi Gamma-Ray Space Telescope. They tried to account for it from known objects, but dark matter was also consistent with the observations. The case is far from closed, though. The center of the Milky Way is a violent place, and the sheer intensity of radiation there leaves any interpretation open to question. Abazajian and Kaplinghat continue to mine data from the Fermi telescope, attempting to confirm their interpretation. If they are right, they are seeing levels of reality that go even deeper than the mind-boggling discoveries at the Large Hadron Collider.

"Dark matter is telling us there are fundamental things that we don't understand about physics," says Van Waerbeke. "Maybe we are at the beginning of a complete revolution."