A record-breaking number of Earth-sized planets orbit a faint star in a nearby galaxy. 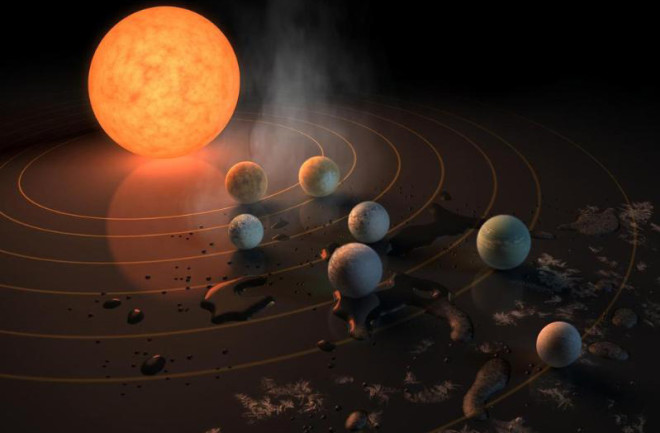 Imagine looking up at the night sky and seeing planets looming larger than our moon. It sounds like science fiction, but astronomers discovered it could be reality for the TRAPPIST-1 system, which boasts seven Earth-sized worlds — a record. Some orbit almost as close to each other as the moon is from Earth.

In May 2016, members of the Belgian TRAPPIST team announced their small telescope had turned up three potentially habitable planets orbiting a star just 40 light-years away. Then they turned to NASA’s Spitzer Space Telescope to get more detail, and it revealed there were actually a whopping seven. Three orbit in the star’s conservative habitable zone, the region where liquid surface water might exist. The results appeared in Nature in February.

TRAPPIST-1 is a cool red dwarf barely bigger than Jupiter in diameter, but about 84 times heavier, giving it just enough mass to ignite into a star. Such stars can have violent eruptions early on, but are extremely stable afterward. So if the planets didn’t cook, life could have later evolved. And research announced in August shows TRAPPIST-1 could be as much as twice our sun’s age. The short distance between worlds also means microbes could planet-hop on space rocks, as described in a June study in the Proceedings of the National Academy of Sciences.