The Illinois-based Tevatron closes after an auspicious--but all too short--career. 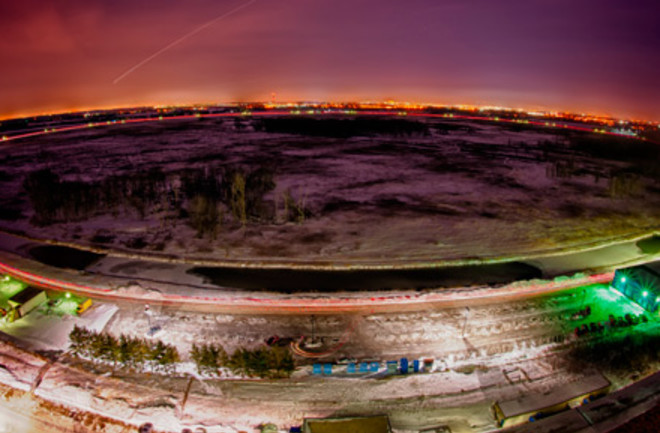 The 3.9-mile ring of the Tevatron seen at night. | Courtesy Reidar Hahn/Fermilab

The Tevatron, a particle accelerator based at the Fermi National Accelerator Laboratory in Batavia, Illinois, shut down on September 30. The machine was 28. The cause of death was the bigger, more powerful Large Hadron Collider (LHC) in Geneva, Switzerland.

At the time of its completion in 1983, the Tevatron was an entirely new kind of collider, the first to use superconducting magnets to steer beams of particles along a circular track. Protons and antiprotons (their antimatter twins) raced around the 3.9-mile-long interior course and, upon colliding, released double the energy of the next-best particle smasher, generating explosions approaching a trillion electron volts, or TeVs (hence the name Tevatron). “This machine was a very large leap,” says physicist Roger Dixon, head of Fermilab’s accelerator division. Much of its technology, in fact, was later used to build the LHC.

The added energy led to numerous discoveries. Tevatron physicists found the top quark, an ultraheavy version of the particles that make up protons and neutrons, along with several new elementary phenomena and the tau neutrino, the long-sought last member of the clan of charge-free, nearly massless particles.

The Tevatron is survived by 1,000 Ph.D.s, more than 1,300 scientific papers, and, despite its many findings, numerous unanswered physics questions. Tevatron scientists still retain hope that they can uncover the Higgs boson, the putative source of mass in the universe. In recent years, as start-up of the LHC was repeatedly delayed, they steadily improved the Tevatron’s efficiency, hurriedly searching for the Higgs in an effort to beat LHC physicists to the prize. Although the Tevatron has shut down, its researchers will continue digging through their 2011 data for signs of the Higgs until February. “That story’s not over,” Dixon says.