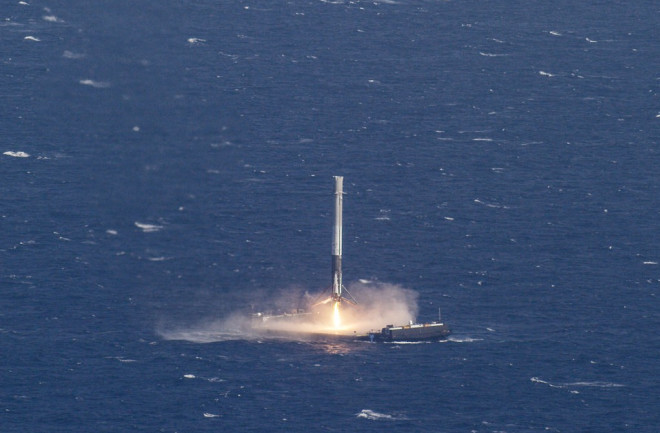 (Credit: SpaceX) SpaceX reached a remarkable milestone on Friday when it successfully launched and landed its Falcon 9 rocket on an autonomous barge floating in the Atlantic Ocean, the fifth time it had attempted to do so. The historic event has already generated plenty of buzz, and has been immortalized from multiple perspectives. Here are some of the best photos and videos from that game-changing accomplishment.1. You may have seen the landing, but have you watched it in crispy 4K video?

2. Here's what it looked like aboard the rocket as it gently touched down on a drone ship. While speaking about the highly difficult landing during a press briefing Friday, SpaceX CEO Elon Musk said, “It’s quite a tiny target. It’s like trying to land on a postage stamp there. It’s like a carrier landing versus a land landing.”

Onboard view of landing in high winds pic.twitter.com/FedRzjYYyQ

3. Here's how it all began on Friday from Cape Canaveral, Fla.

(Credit: SpaceX)4. The Falcon 9 rocket just seconds from sticking its landing aboard the drone ship “Of Course I Still Love You” in the Atlantic Ocean.

(Credit: SpaceX) 5. And here's the sight SpaceX engineers — and spaceflight enthusiasts around the world — were waiting so long to see.

(Credit: SpaceX) 6. Friday's landing serves as a reminder of how far SpaceX has come in just over a year. Do you remember the first time the Falcon 9 attempted to touch down on a drone ship?

While the landing was spectacular, the rocket's flight had another purpose as well — to deliver a payload of supplies to the International Space Station via SpaceX's Dragon capsule. After reaching orbit, the Dragon had to play catch-up, spending most of Saturday chasing after the ISS and finally reaching it early Sunday morning, when British astronaut Tim Peake officially brought it aboard with the help of a robotic arm. NASA released footage from the ISS showing the capsule's approach and docking maneuvers. In the video below, you can watch the capsule dock in a high-stakes ballet performed against a backdrop of cloud tops and the vast Pacific ocean. Floating 250 miles above the surface of the Earth, the capsule makes a slow approach as the ISS crosses over the coast of Namibia and docks at the Harmony module somewhere around Hawaii. [embed]https://www.youtube.com/watch?v=lEYQ4oBxGtA[/embed] Inside of the capsule were over three tons of supplies and experiments, including a first-of-its-kind inflatable test module made by a private aerospace company. The ISS relies on several deliveries a month containing necessary supplies and new experiments. In recent years, more of these spacecraft are being launched by private aerospace companies, such as the Dragon, and the Cygnus capsule owned by Orbital ATK.