5 Things to Know About Juno's Rendezvous with Jupiter 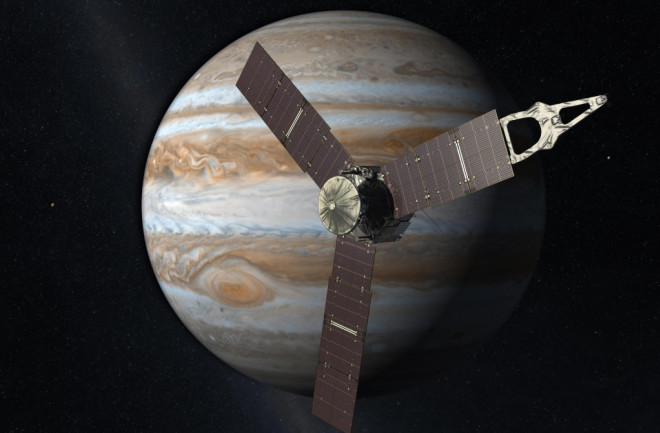 (Credit: NASA) On Monday, after a five-year journey, NASA's Juno probe will finally enter orbit around Jupiter, becoming the first orbiter to Jupiter since 2003. The craft will study the planet for two years in a very eccentric orbit to protect it from Jupiter's harsh radiation, swooping by the planet every 14 days. With the start of the mission nearly underway, here's what you need to know.

1) This will become fastest human-made craft ever.

A combination of the gravitational tug of Jupiter, an orbit just 2,900 miles above the surface of the planet, and its initial launch velocity will have the craft zipping along at 129,000 mph. Those speeds will slow down (then speed back up) thanks to the craft's very unusual orbit which will take it perilously close to the planet in a polar orbit before sending it back out at a much further distance. Just how weird will that insertion be? Watch this video:

2. Juno is the sixth craft to visit Jupiter, and the first new visitor in decades

The exploration of Jupiter began in 1973 when Pioneer 10 flew by the gas giant. Pioneer 11 flew the next year. Pioneer 10 was meant to study Jupiter's radiation for future missions. In the process of this study, the craft was damaged (though not destroyed) by the unexpectedly harsh radiation. A few years later, Voyagers 1 and 2 performed flybys in 1979, the first in March and the next in July. Those crafts took breathtaking photos of the systems and gave the first hints that Jupiter's moon, Europa, may harbor an ocean. NASA didn't send an orbiter to Jupiter until Galileo was launched in 1989, taking a more leisurely pace to Jupiter than any previous visitors in order to enable a gravitational capture. The probe arrived in 1995 and studied the planet and its moons for eight years before plunging to its death into Jupiter in 2003 to ensure none of the moons became contaminated, as Europa and Ganymede (and to a lesser extent, Callisto) are believed to have oceans and the possibility of life. Juno, originally launched in 2011, is the second orbiter and will concentrate mostly on studying Jupiter itself.

3. Juno will orbit Jupiter at its poles

(Credit: NASA/JPL-Caltech/KSC) Juno is designed to study, in detail, the magnetic field and gravity field of the planet, as well as the magnetosphere around the poles. To do this, it has to enter a polar orbit, the first craft to enter a polar orbit around one of the gas giants. These studies will reveal water content in Jupiter, determine the validity of some formation scenarios, and complete a thorough study of the atmosphere. On the latter objective, the Galileo orbiter plunged an atmospheric probe into the atmosphere, but may have struck into a uniform pillar of ammonia gas, clouding results.

(Credit: NASA/JPL-Caltech/KSC) Juno will put itself on the line by coming too-close-for-comfort to Jupiter a total of 37 times. Each time, it will come just a few thousand miles above the top clouds, deeply within the planet's radiation belts. The electronics are shielded by 1 cm thick titanium walls, providing a "vault" deep within the spacecraft to protect the "brains" of the operation. This is in addition to protection on the exterior of the craft. While the instruments are on the outside (and are somewhat shielded, though not all expected to survive the duration of the mission) all the actual electronic components are in the vault.

5. Juno has some passengers.

(Credit: NASA/JPL-Caltech/KSC) Three LEGO figurines are boldly going where no brick has gone before. The figurines or "minifigs" are built in the likenesses of Galileo, who discovered the four largest moons of Jupiter, and Jupiter and Juno, the Roman gods for whom the planet and the probe, respectively, are named. Rather than being built of plastic, the minifigs are built out of aluminum. The figurines were put on to "inspire children to explore science, technology, engineering and mathematics," according to NASA. Of course, they'll also plunge into Jupiter at the end of the mission in 2018, but hopefully that won't make kids feel like their dreams are dying, too.