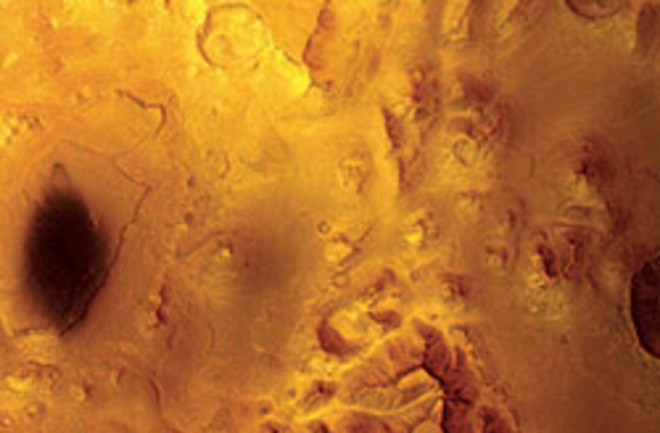 Valles Marineris, a huge canyon on Mars, shows unmistakable signs that it was shaped by flowing water. | Courtesy of ESA/DLR/FU Berlin/G. Neukum

NASA’s twin rovers, Spirit and Opportunity, reached Mars in January with one goal: Prove the Red Planet was once awash with water. In the weeks that followed, Opportunity succeeded. The rover detected a high concentration of sulfate minerals together with chloride and bromide salts in one rock outcrop. This was suggestive, but not conclusive, evidence of a previous presence of water. In another outcrop, the rover found jarosite, which on Earth forms only in water. Finally, it identified round rock formations, dubbed blueberries, that are rich in hematite, also an aqueous mineral. At last there could be no doubt: The Meridiani Planum region where Opportunity landed was once part of a shallow, briny Martian sea.

Then in October Opportunity uncovered possible signs that Meridiani Planum was wet not once but twice. Polygon-shaped fractures in a group of flat rocks suggest that the original sea dried up billions of years ago but that the region became moist a second time much later, perhaps when a layer of frost melted.

Planetary scientist Steven Squyres of Cornell University, head of both rover science teams, calls the Meridiani sea discovery the mission’s biggest success. It was hardly the only one. Spirit found similar, if less definitive, hints of another, long-vanished body of water on the opposite side of Mars. The rover later discovered a softball-size, hematite-rich rock, studded with knobby spokes scientists don’t yet understand.

Meanwhile, the European Space Agency’s Mars Express orbiter captured complementary images from orbit. Glorious shots illustrate the tributaries of an ancient river system and show how fields of water ice even now stretch out from the Martian south pole. The big question is not whether Mars had flowing water but whether that wet, warm phase of the planet’s history lasted long enough for life to take hold. NASA’s Phoenix mission, which will dig into the polar ice and search for organic compounds, should provide some answers, starting in 2008.