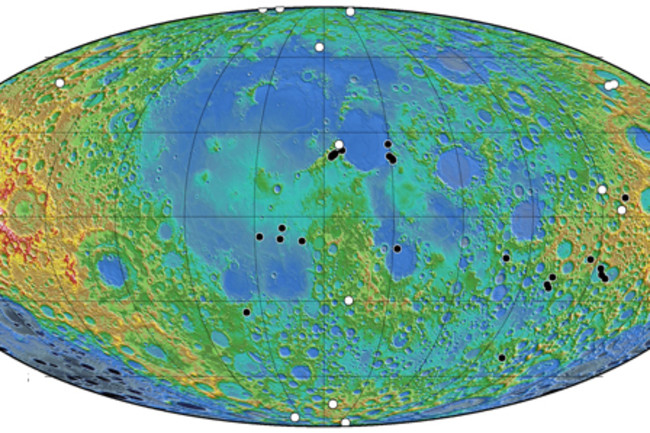 The old gray moon, she ain’t what she used to be. Images from the Lunar Reconnaissance Orbiter (LRO) spacecraft, released in October, show a pattern of cliffy scarps all across the lunar surface (as shown on the map above, with white dots indicating newly discovered scarps and black dots marking previously known ones). Lunar geologists reckon that the scarps were created as the moon’s core lost heat and contracted. It should be noted that the moon has not shrunk by very much, just a few hundred feet in radius over the last billion years. But that’s not nothing, either, when you consider that—even allowing for the distortion of perspective—the moon was never really that big to begin with.

Then again, the moon is not just old and wrinkled—it is also shockingly rich. LRO’s partner spacecraft, LCROSS, found about 5 percent water-ice in the lunar soil. The surface also abounds in minerals, including silver, mercury, sodium, calcium, and magnesium, along with volatile gases like methanol, formaldehyde, and hydrogen sulfide. That said, it would take a fairly hard heart not to feel at least a twinge of sadness, tinged with unease, at the thought that the moon, collapsing in on itself, will never be quite full again.