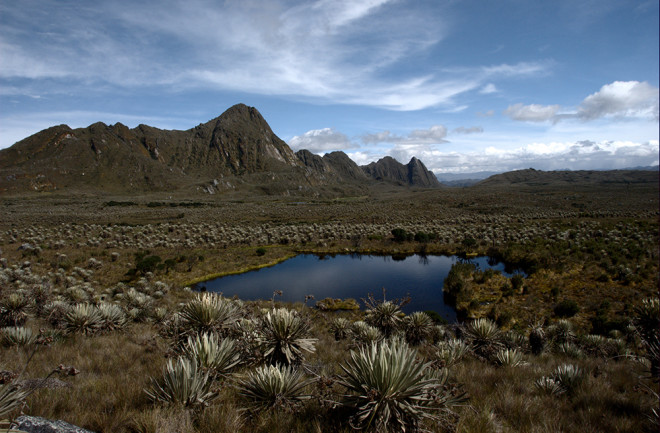 The Páramo de Sumapaz in Colombia, a Round of 16 team in the Geology World Cup. Wikipedia Commons. So, we're made it through the 2018 Geology World Cup Group Stage. Now it's time to vote for the countries that will make it through to the quarterfinals. To make it easier, I've created a single poll for your votes, so cast your ballot now! The Matches:Left bracket:A1. Russia vs B2. Portugal: In soccer, this might lean strongly in Portugal's direction but in geology, Russia is the behemoth. I mean, Russia is big enough that it has been the site of not one but two major asteroid/comet/something impacts in the past 150 years: the 1908 Tunguska event in Siberia and 2013 Chelyabinsk meteor. I'd love to think of something that Portugal could come back with beyond the 1755 Lisbon earthquake. Now, that quake was the largest in recorded European history, close to a M8.5-9 (so as large as the 2011 Tohōku earthquake) and it even generated tsunamis. However, Russia isn't exactly devoid of tsunami-generating, massive earthquakes either. C1. Perú vs. D2. Croatia: Probably one of the bigger upsets of the Group Stage, Croatia appears in the Round of 16 instead of Argentina. Of course, it gets another South American juggernaut in Perú. The islands off the coast of Croatia in the Adriatic are picturesque and may even be hiding some active faulting under the region. Perú has multiple actively erupting volcanoes like Sabancaya. Some of the world's largest gold deposits are found in Perú as well, including Yanacocha that has produced $7 billion of gold. E1. Switzerland vs. F2. Germany: Well, at least Germany made it through here, am I right? The Alps have some of the most rugged terrane anywhere on Earth thanks to the active tectonics and the recent record of glaciers. Of course, current global climate change means that Switzerland may lose as much as 90% of its glaciers by 2100. You also can't underestimate the importance Germany had in the growth of geology as a discipline, including Georg Bauer's De Re Metallica, published in 1556. G1. Panamá vs. H2. Colombia: It has to come to this. The two countries, once a single nation, face off in the Round of 16. Colombia is one of the world's largest producers of emeralds as well as a major player in South American coal. Did I mention the cathedral made from a salt deposit carved into a mountain? Or the volcanoes, oh so many volcanoes? Anyway, Panamá's tectonic importance aside, the first North American monkey fossils were discovered in the country during expansion of the Canal. Right bracket:B1. Iran vs. A2. Egypt: Because Iran is cloaked in such mystery these days, not many people know how complex the geology is. The country has experienced multitudes of large earthquakes over the 20th and 21st centuries, some with extremely high death tolls. Although it is Iranian oil in the news today, the country has over $770 million of mineral reserves, including gold, uranium and coal. As for Egypt, over 10% of its GDP comes from oil and gas extraction. And although Egypt may not have much in the way of its own volcanoes, the global eruptions of ancient times may have played a role in the rise and fall of dynasties. D1. Iceland vs. C1. Australia: Now, this is a match. Iceland! Australia! Head to head! Both countries that are alone on their landmass. One country, Iceland, has some of the youngest rocks on Earth, scraped clean by glaciers. The other, Australia, has some of the oldest rocks that have been worn down over billions of years by weathering and erosion. It is hard to have a larger contrast between countries. F1. Mexico vs. E2. Costa Rica: A battle between near neighbors, Mexico and Costa Rica boast many of the same features: volcanoes, earthquakes, gorgeous shorelines. Many people don't realize that one of the largest volcanic eruptions of the 20th century happened at El Chichón in Mexico, where in 1982, the almost unknown volcano sent so much sulfur dioxide into the atmosphere that the climate cooled briefly. Costa Rica's Rincón de la Vieja is the most recent member of a group of volcanoes that total over 130 km^3 and could be one of the potential places for future large eruptions. H1. Japan vs. G2. England: Japan breezed through the Group Stage, which isn't a shock considering how many recent big geologic events have occurred across the island nation. Japan might be lacking in some mineral resources, but recently may have discovered a massive deposit of much-sought-after rare earth elements. England might seem to be a less geologically-active nation, but the British Isles have seen a lot of earthquakes over the centuries, including a M5.2 in Lincolnshire in 2008.