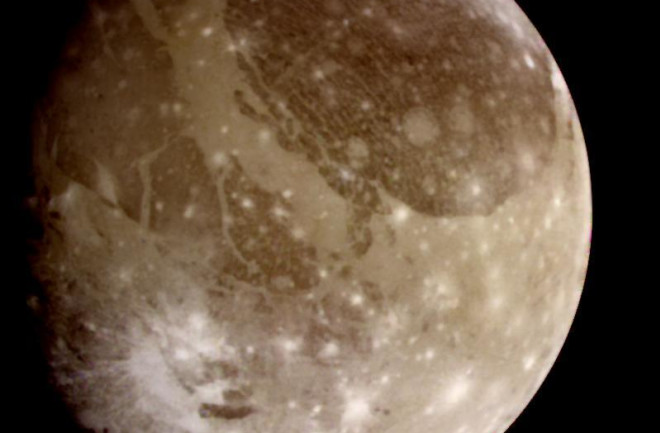 Jupiter's moon Ganymede, as photographed by Galileo. (Credit: NASA/JPL)Jupiter’s moon, Ganymede, is colossal. It’s bigger than Mercury or Pluto and boasts bright auroras, along with a unique magnetic field. Much of what we know about the moon comes from the Galileo spacecraft’s flybys of Ganymede in the 1990s. But a lot of information from the NASA mission has yet to be published.A magnetosphere, or the area where a planetary body's magnetic field is dominant, is common for planets, but it’s extremely rare for moons. So scientists were bewildered to find one at Ganymede in 1996. No other known moon had a magnetic shield like it.

However, NASA researcher Glyn Collinson scoured old Galileo data and discovered new new insights on Ganymede’s unusual magnetic field. The shape of most magnetospheres is determined by pressure from the oncoming solar wind, but in Ganymede's case

it comes from plasma from Jupiter. His research was published on April 30th in Geophysical Research Letters.

Equipment onboard Galileo, called the Plasma Subsystem (PLS), was used to measure the density, temperature and direction of plasma coming from the planet. The effect caused by plasma is shown in the shape of Ganymede’s magnetic sphere, which has a small horn-shaped disfigurement that follows the direction of the orbit of the moon. The old data don’t only offer insights into the magnetosphere, either. Ganymede’s auroras, which are similar to Earth’s southern and northern lights, are uncommonly bright, and Collinson thinks that it's due to powerful interactions between the moon's magnetic field and that of Jupiter, something called "magnetic reconnection". That's different from here on Earth, where the southern and northern lights are caused by incoming solar particles. The researchers also found a stream of water-based particles flowing from the moon, the result, they say, of a hail of charged particles scouring them from the surface.Collinson’s study shows that more research on Ganymede and its surrounding moons still needs to take place. Especially with the jumble of information from Galileo, there is much more to find out from the Jovian system. In 2022, the European Space Agency plans to launch a spacecraft to further examine Jupiter’s moons. The Jupiter Icy Moons Explorer (JUICE) will visit Europa, Callisto and Ganymede in the 2030s.Ganymede’s lingering secrets are proof of how much we don’t know; it shows information can be hiding right under researchers’ noses. It also raises questions about what other information may be hidden right in plain sight.