After the end of the disastrous space shuttle program, it's not at all clear where the space agency is going—or if it has enough money, skills, or buy-in to get there. 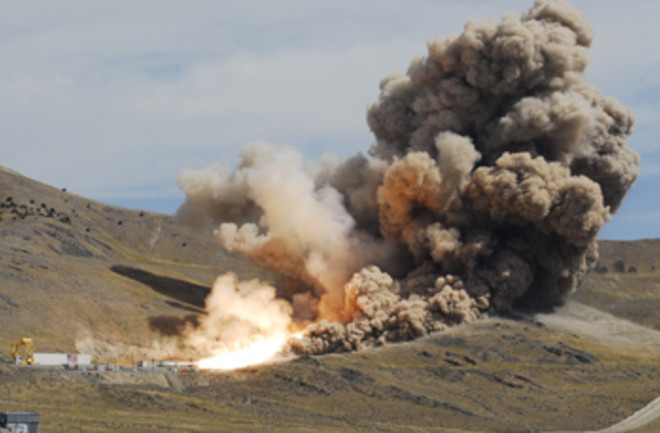 Ground test of NASA's Ares I rocket, which is five years behind schedule. It may be replaced with private rockets. ATK | NASA

Norman Augustine is a well-known critic of wasteful government programs. As former CEO of Lockheed Martin, he is also a grizzled veteran of the aerospace industry. That explains why the Obama administration chose Augustine to head a commission on the future of NASA’s human spaceflight program—and why the space agency was so shaken by his conclusion.

NASA “appears to be on an unsustainable trajectory,” Augustine and company began their report. Its plan to return to the moon by 2020 is out of the question. To keep the International Space Station aloft past 2016 (the program’s premature end date) and maintain a viable human space exploration program, NASA will have to scrape up another $3 billion per year—hard to imagine in a time of trillion-dollar deficits. “The choice is to lower aspirations or increase the budget,” says John Logsdon, a space policy expert at George Washington University.

One way to cut costs, cautiously endorsed by Augustine’s commission, is to give private firms a bigger role in providing launch services. Contractors like Lockheed Martin and Boeing have always built the hardware, but NASA has kept close watch on each step in design and construction. That method worked for the Apollo program, but it has been a disaster ever since. For instance, the space shuttle, originally intended to provide cheap and reliable transport to low Earth orbit, has turned out to be roughly 1,000 times more dangerous and 100 times more costly to launch than first promised. In classic bureaucratic style, NASA diluted the original idea by trying to make the shuttle all things to all people: a satellite launcher for the military as well as a pickup truck to space for the civilian program.

Private companies, the panel’s reasoning goes, would be better at reining in costs and keeping their eye on the ball. In addition, NASA would not have to pay the huge up-front costs of development and construction. Instead, it would give seed money to private firms and guarantee a market for their services. NASA has already begun to work this way in the development of a cargo vessel for the space station. (When the shuttle is mothballed, currently set for the end of 2010, NASA will have to rely on Russia’s Soyuz spaceship to get astronauts to the station.) The agency has given small grants to SpaceX, the aerospace firm founded by PayPal mogul Elon Musk, and Orbital Sciences, a firm that builds missile-defense systems; each company is developing its own launchers and capsules.

Pursuing this path would mark a huge change in NASA’s way of doing business. It would mean entrusting the safety of its crew to third parties. In terms of hardware, though, it would be a cinch. SpaceX and Orbital rockets could accommodate astronauts with minor modifications. And scrapping NASA’s new Ares I booster program could save billions of dollars over the next few years. “We think this is the time to create a market for commercial firms to transport both cargo and humans between the Earth and low Earth orbit,” Augustine said at a press conference accompanying the report’s release. “NASA would be better served to spend its money on going beyond Earth orbit rather than running a trucking service to low Earth orbit.”

That would free the agency to focus resources on the Ares V rocket—now on the drawing board—or another heavy-lift rocket that could carry crews into deep space. Mars is “the ultimate destination” for human exploration, but the commission recommends first tackling more attainable yet exciting intermediate goals, such as visiting asteroids and the two small Martian moons.

If NASA cannot find a way to squeeze more out of its budget, it will have to deep-six some programs. A big question mark is the fate of the space station. Terminating the program early in 2016, as currently scheduled, would help release NASA from its fiscal straitjacket, but it would “significantly impair U.S. ability to develop and lead future international spaceflight partnerships” while wasting 25 years of investment, Augustine’s group warns. Europe, in particular, would not take a cancellation kindly, having already committed billions of euros for the Columbus space-station module. And the robotic exploration program is already providing a big bang for NASA’s buck, discovering hidden water on the moon, possible signs of life on Mars, and tropical storms on Titan just in the past year. Cutting future unmanned missions would cause uproar among the scientific community while freeing up only modest funds.

NASA is in a tough spot. But from necessity, it is poised to reinvent itself.