1752 Manuscript, With the "Real" Story of Newton and the Apple, Goes Online 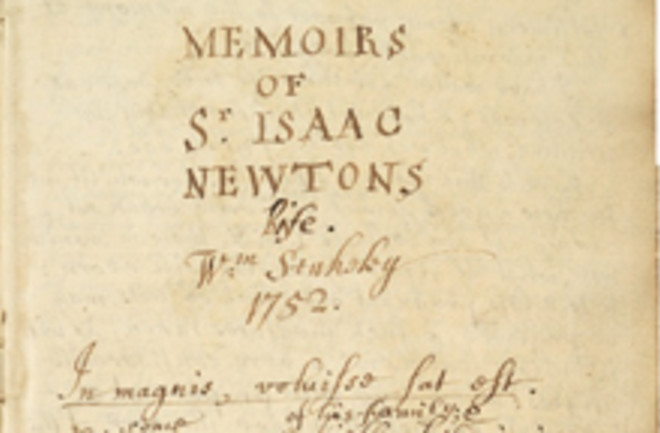 Attention lovers of old-timey science: the good stuff keeps on coming. Last month, when Britain's Royal Society released digital versions of some of its greatest scientific papers to celebrate its 350th anniversary, we brought you delightfully odd and gruesome samples from the library. Now the society has uploaded another batch of classic manuscripts, including a book containing an early account of Isaac Newton's apple story, one of science's most famous anecdotes.

A biography written by William Stukeley, one of Newton's contemporaries, relates the apple story as Newton himself told it to Stukeley. The text of Stukeley's Memoirs of Sir Isaac Newton's Life has long been available online, but the Royal Society opened up digital access to the handwritten manuscript itself Sunday [Scientific American]

After dinner, the weather being warm, we went out into the garden and drank tea under the shade of some apple trees, only he and myself.

Amidst other discourse, he told me he was just in the same situation as when formerly the notion of gravitation came into his mind.

Why should that apple always descend perpendicularly to the ground, thought he to himself, occasion'd by the fall of an apple, as he sat in a contemplative mood.

Why should it not go sideways or upwards, but constantly to the earth's centre? Assuredly, the reason is that the earth draws it.

While Newton personally told this story to Stukeley, the latter's book wasn't published until a quarter-century after Newton's death. And the great scientist himself may have embellished the anecdote.

Keith Moore, the Royal Society's head of library and archives, said: "Scholars know where the apple story comes from, and clearly it's an anecdote Newton polished. What we want is for the public to see the manuscript itself. It wasn't just Newton that polished it, succeeding generations put a gloss on it as well – that story just humanises him just a little bit" [The Guardian]

. Indeed, some popular retellings have embellished the tale to add that the apple didn't just plop to the ground near Newton, but actually clonked him on the head. However padded or polished, the apple story still inspires the imagination. Thomas Levenson, MIT professor, DISCOVER contributor

, and author of Newton and the Counterfeiter, tells DISCOVER that scholars have gone to great length to investigate its details, including some who took cuttings of what they believed to be Newton's original apple tree. MIT has an apple tree grown from the supposed Newton cuttings that saw first fruits

in 2006. Stukeley's Newton book isn't the only newly released manuscript, though. The Royal Society also digitized