“Seeing the surface up close for the first time, in its true glory, is amazing,” says Dawn project lead scientist Christopher Russell. “We’re in awe.” 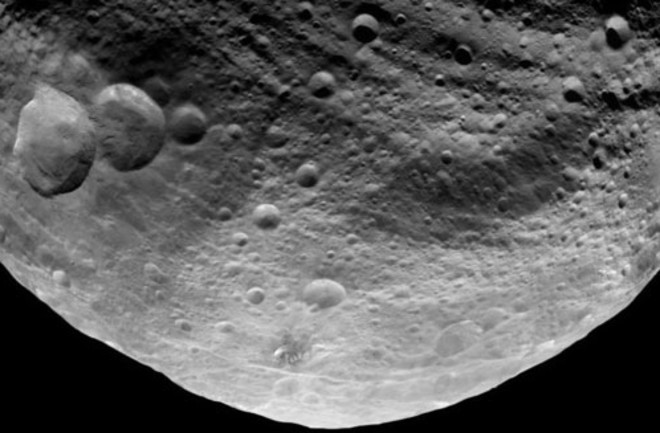 After traveling four years and 1.7 billion miles, NASA’s Dawn spacecraft arrived at Vesta last July, the first stop on its tour of the largest asteroids in the solar system. Until Dawn’s arrival, the only clues about Vesta came from grainy telescope images and meteorites that had fallen to Earth, many of which are believed to have come from the giant asteroid. Dawn’s 1-million-pixel photographs are quickly revealing that Vesta’s landscape is surprisingly complex for a floating rock the size of New Mexico.

The mountain at the center of a 300-mile-wide crater on the asteroid’s surface is particularly awe-inspiring. At around 70,000 feet, the peak stands more than twice as tall as Mount Everest and is rivaled in the solar system only by Mars’s monster volcano, Olympus Mons. Russell’s team also noticed a variety of colors and minerals on the asteroid’s surface, with bright spots—perhaps crystals or another reflective material—interspersed with black streaks on scarps and crater walls.

These mysterious surface features could have a lot to say about what our world looked like in its earliest years. Astronomers believe that rocks just like Vesta were the raw material that coalesced to form Earth and the other rocky planets 4.5 billion years ago. Dawn’s study of Vesta and Ceres, the largest asteroid of all, should help scientists reconstruct the early years of the solar system.

Dawn will spend the first half of 2012 in a snug, 120-mile-high orbit around Vesta, taking detailed images and examining the asteroid’s composition. The spacecraft is scheduled to depart in July for a 2015 rendezvous with Ceres.