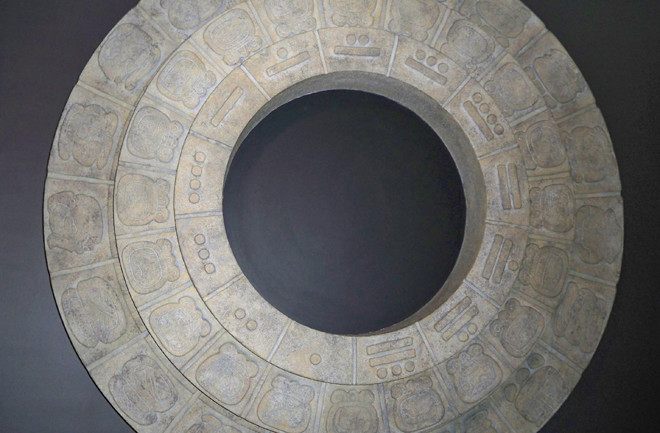 The Maya Calendar -- it really doesn't tell us the world will end 12/21/12. Image: Matthew Bisanz / Wikimedia Commons So, here we are in December already. December 2012. You know what that means? MAYA APOCALYPSE! Got your attention? Good. Because if you think anything even approaching armageddon* is going to occur on December 21, 2012, you are 100% wrong. Now, I'm not going to get into all the gritty details of where this notion that the world "will end" on 12/21/2012 arose. It more or less boils down to some confused ideas about the Maya** calendar and when it supposedly ends (or at least one period begins and another ends). There has been some research on the subject and it is anything but settled what exactly is in the Maya calendar and what, if any, significance 12/21/2012 might have (other than people love dates with pretty number sequences). There is no hard, unquestionable archeological evidence that 12/21/12 has much meaning in the Maya calendar or that even if it did, that it proclaims "we're all doomed". However, if we (wrongly) assume that 12/12/2012 is the end of the world, then how will it supposedly happen? Most of the "theories" I've seen involve a lot of nonsense about (1) alignment of planets and the galactic center; (2) the close pass of some dark star or large planet to Earth (e.g., Nibiru); (3) complete random rubbish. So, as to try to quell some of the rumors out there, I thought I'd do a brief Q & A about the Maya Apocalypse because a lot of the ways the world ends involves earthquakes and volcanoes. Here goes: Q: I've heard about the Earth, Sun, other planets and the galactic center aligning on 12/21/12. Will this trigger disasters on Earth. A: There is not a single iota of evidence that large-scale planetary alignments cause changes in geologic events - like earthquakes and eruptions - on Earth. The only celestial bodies that could play some role - and there is some evidence that suggest that they may, in minor ways - are the Sun and the Moon. This is due to their relative close proximity (especially the moon) and their mass. I've covered some of this in my discussion of why the so-called "Supermoons" are silly and play no role in increasing/decreasing geologic events. What about the alignment with the galactic center? The center of the galaxy must exert some force on the Earth (and solar system) or we wouldn't be orbiting it. However, beyond that fact that alignments like this happen all the time, the force that the galactic center exerts on Earth is ~0.00006x that of the Moon on Earth and ~0.00000037x that of the Sun, doesn't it seem a little ridiculous to claim that the galactic center can change anything on Earth if the Sun and the Moon cause little-to-no effect on geologic events? Q: What about the sun's dark star companion and/or rogue planet Nibiru? A: Here is where arguing with the Maya Apocalypse believers gets tricky. Nibiru, the rogue planet or dark solar companion, does not exist. However, just because something doesn't exist doesn't mean that it can't get its way into the Mayan apocalypse lore. Now, if anything of the mass needed to cause any effects on Earth (see above) was approaching, someone would have seen it by now. It would have to be either much larger or much denser than the Moon to even jostle a faultline Even objects with very low albedo (reflectivity) can be seen from Earth, even if they are small, so how a large object approaching would not have been noticed and announced by someone - professional or amateur - makes its existence next to impossible. Now, you could claim that the world's governments are forcing everyone, everywhere to cover it up and I can't argue with that because it has no factual basis. If you are prone to believe such things, send me an email and I can let you in on some secrets I have about Roswell and HAARP.

Q: Could the disasters like they had in 2012 really happen?

A: HAHAHHAHAH. Oh wait, sorry, that was a real question? 2012 is as far from scientific fact as, oh, the Wizard of Oz. Almost everything that occurred in 2012 can't happen based on our understanding of the Earth - the plates can't wander the Earth's surface -- moving 1000s of km overnight, neutrinos can't magically become microwaves (even during solar maximums), the magnetic field can't magically change instantaneously, John Cusack can't really drive a Bentley out of the back of crashing An-226 onto a Tibetan glacier and have everyone survive. Sorry. Q: Isn't the Sun at a solar maximum right now and a solar storm will wipe out all life on Earth? A: The Sun does go through highs and lows of activity - and the next maximum is predicted to occur in 2013. However, the cycle is ~11 years long, so we have go through many highs and lows over humanity's existence. Why the 2013 maximum (which, incidentally is after 12/21/12 ... I checked) would be any different has no basis. Q: I read that the magnetic field will "flip" on 12/21/2012 and earthquakes/eruptions will happen because of it. A: Sorry, first off, magnetic reversals can't just "flip" like a switch. Our understanding of the Earth's magnetic field involves the motion of the liquid outer core, so changes in the magnetic field are likely gradual, taking thousands of years to occur. Also, there are likely no disasters that occur during the process of a magnetic field reversal. Over the last few million years, the magnetic field has reversed numerous times and no global cataclysm came each time. Q: Isn't there a fleet of spaceships coming to attack Earth on 12/21/2012? A: Ok, so that is true. Oh wait, no, it's not. Sorry folks, I can't even get into science on this one because it has no legs on which to stand. Q: So, should I be worried about endtimes on December 21, 2012? A: No, not in the least. The Maya Apocalypse is just another in a long line of wild apocalyptical theories that have likely be occurring since, well, the Dawn of Man. There have been so many false "endtimes" predictions that, as Riley Finn put it: "It turns out I suddenly find myself needing to know the plural of apocalypse." If the end of world (and let's be honest, most of this really means the end of humans) were to come from within the Earth or from space, we would like know about it well in advance (or, alternatively, have no warning whatsoever) with scientific evidence to back up the claims of doom. There are very real threats of potential asteroid and comet collisions with Earth that could end civilization as we know it. However, those do not happen magically because some Mayan carver decided he/she ran out of space on the calendar wheel. Feel free to chuckle at the people who are seriously looking for bunkers to shelter in on December 21, 2012. So far, the Apocalypse Now crowd is hasn't gotten one right yet (case in point: you exist). At least you know that science doesn't fall for apocalyptic hysteria. *Author's note -- These are acceptable ways that the civilization ends: asteroid/comet, climate, massive volcanic eruption, zombie pandemic, Daleks, the Master, the Mayor turns into a giant snake monster, Gachnar (although that would be a very tiny apocalypse), gateway to Hell opens over Los Angeles, Anubis, Tripods, Triffids, Ragnarok and possibly a Farnsworth Doomsday Device. ** Apparently there is a lot of debate about whether to use Maya or Mayan. Special thanks to @thirstygecko.