Your Next Sponge Bath May Come From a Robot Named Cody 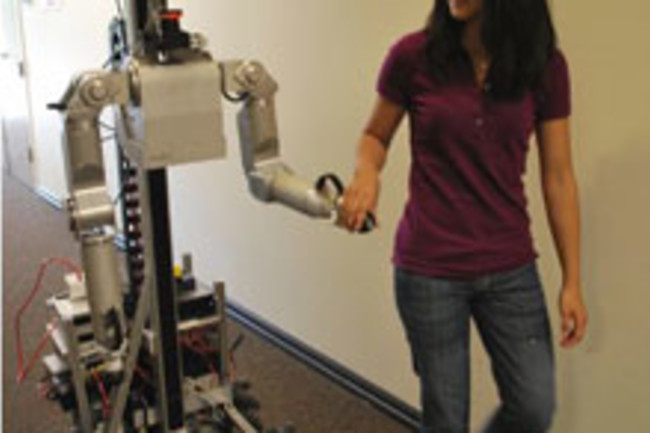 A team at Georgia Tech is looking to replace your sponge bath nurse with this sexy beast to the right. No, not the girl. The sponge bath robot next to her, named Cody. He's the one that wants to wipe you down with his delicate towel hands. The robot was developed by researcher Charles Kemp's team at the Healthcare Robotics Lab, and was described in a presentation and accompanying paper (pdf) at the International Conference on Intelligent Robots and Systems. The robot uses cameras and lasers to evaluate the human's body, identifying dirty spots, then gently wipes with its towel hands, making sure not to apply too much or too little pressure. It has flexible arm joints with low levels of stiffness to make sure that it doesn't push too hard. Study coauthor Chih-Hung (Aaron) King put himself in the tester's spot for the robot's first rubs. He relived the experience for Hizook:

"As the sole subject in this initial experiment, I'd like to share my impressions of the interaction. In the beginning I felt a bit tense, but never scared. As the experiment progressed, my trust in the robot grew and my tension waned. Throughout the experiment, I suffered little-to-no discomfort."

Hit the jump for a video of the bot rubbing on King: An interesting note about robots performing this kind of task: They are the ones that initiate human-robot contact. It may not seem like a big deal, but being in the receiving position of a robot-induced sponge bath might be a little unnerving, King explained to Hizook

"The tasks performed in this experiment involved the robot initiating and actively making contact with a human. This differs from most (current) research on human-robot contact, which is initiated by humans rather than robots. It would be interesting to study how the general population, specifically patients, would react to such robot-initiated contact. Indeed, the psychological impact of robot-initiated contact may become important for future human-robot interaction (HRI) research."

Meanwhile, we can't make up our minds: Would it be more unnerving having Cody wipe you down than it would be embarrassing to have a human nurse or loved one do it? Related content: Discoblog: Robot, Build Thyself: Machine Made of Lego Builds Models Made of Lego

Discoblog: Helpful Robot Can Play With Your Socks

80Beats: A Robot With Beanbag Hands Learns the Gentle Touch

DISCOVER: The Robot Invasion Is Coming—and That’s a Good Thing