Your Clue Is: "This Robot Will Attempt to Crush Humans in 'Jeopardy!'" 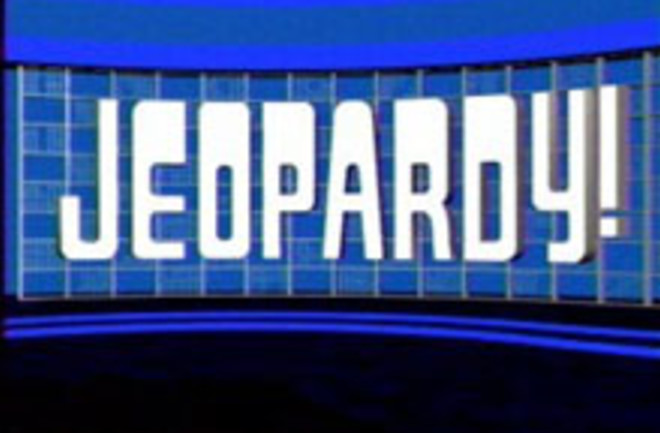 Is the human brain in final jeopardy? Last April IBM announced its newest plan to crush humans in the gaming sphere: After taking us to task at chess, it would conquer us at "Jeopardy!" Since then the game show-playing robot, Watson, has been in development (cue 80's training montage featuring computer programmers). J-Day approaches, and this fall the battle should commence. The Game In a lengthy New York Times Magazine feature on Watson this week, some of the details of the match became clear. It will take place this fall on national television.

Watson will not appear as a contestant on the regular show; instead, “Jeopardy!” will hold a special match pitting Watson against one or more famous winners from the past. If the contest includes Ken Jennings — the best player in “Jeopardy!” history, who won 74 games in a row in 2004 — Watson will lose if its performance doesn’t improve. It’s pretty far up in the winner’s cloud, but it’s not yet at Jennings’s level... The show’s executive producer, Harry Friedman, will not say whom it is picking to play against Watson, but he refused to let Jennings be interviewed for this story, which is suggestive [The New York Times].

The Preparation If you've always yearned for "Jeopardy!" to feature the same kind of obsessive game-planning and secrecy as professional sports, this is your time. While folks on the show's side won't reveal the human contestants, the folks on the IBM side are busy testing Watson against humanity in mock "Jeopardy!" games. They even found a fake Alex Trebek (and no, it's not Will Ferrell).

I.B.M.’s scientists began holding live matches last winter. They mocked up a conference room to resemble the actual “Jeopardy!” set, including buzzers and stations for the human contestants, brought in former contestants from the show and even hired a host for the occasion: Todd Alan Crain, who plays a newscaster on the satirical Onion News Network [The New York Times].

The Words Deep Blue didn't need words. Chess is a game of math and strategic logic, a game reducible to numbers and therefore ideally suited to an IBM supercomputer. "Jeopardy!" is something different: It may reward machine-like memorization of trivia, but you have to understand what you're being asked before your brain can go get it. That's the AI problem for Watson's creators.

The biggest hurdle machines have to overcome in truly glorious human pursuits such as "Jeopardy!" is to gain an instinctive appreciation for natural language. It's the puns, the jokes, the linguistic idiosyncrasies that have tended to stifle the most ambitious of machines. However, Harry Friedman, executive producer of "Jeopardy!," was effusive in this IBM video. "I think we've gone from being impressed to blown away" [CNET].

Watson's proficient even at those groan-inducing "Before and After" clues. Perhaps because it has no feelings. The Potential Winning on "Jeopardy!" is, of course, the pinnacle to a life's work, but the supercomputer Watson might achieve more than racking up enough winnings to finally afford that New Zealand vacation. Computers that could just understand and correctly interpret your query and find answers would be an enormous advance, says IBM's David Ferrucci.

Ferrucci was never an aficionado of “Jeopardy!” (“I’ve certainly seen it,” he said with a shrug. “I’m not a big fan.”) But he craved an ambitious goal that would impel him to break new ground, that would verge on science fiction, and this fit the bill. “The computer on ‘Star Trek’ is a question-answering machine,” he says. “It understands what you’re asking and provides just the right chunk of response that you needed. When is the computer going to get to a point where the computer knows how to talk to you? That’s my question” [The New York Times].

Computers that get subtlety? Humanity, I hope you enjoy parting gifts. Related Content: 80beats: Watson, an IBM Supercomputer, Could Be the Next "Jeopardy!" Champion